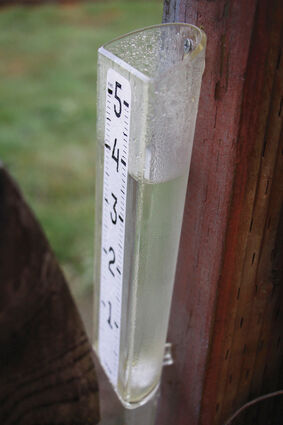 The Oregon Department of Forestry's West Oregon, Western Lane and 1.2-million-acre South Cascade districts, the latter of which includes the Sweet Home unit, declared an end to their local fire season and dropped industrial fire precaution restrictions on Tuesday, according to an ODF email sent earlier this week.

The ODF had announced Friday, Oct. 1, that it and Oregon State Parks had lifted a blanket ban on campfires in state-managed forests and parks east of Interstate 5. However, individual park restrictions may still be in place.

Chad Calderwood, ODF wildland supervisor for the Sweet Home unit, said the fire season usually concludes in the beginning or middle of October, depending on such environmental factors as rainfall and temperatures.

"Usually we don't burn much more than three to five acres a season." This is despite the fire season beginning this year in early June, which he described as "early for us."

Last year saw a highly notable exception to that regional average, with just under 42 acres burned in the area. Calderwood suspected the political climate may have been responsible for a number of remote arson fires. This season's significantly smaller impact may be a response to last year's intense experience.

"With all the fires and Level 3 evacuations in communities surrounding Sweet Home last year, people are a lot more scared," he explained. "They're suffering from a little trauma based on how close and how real it was."

According to Calderwood, his unit has responded to 65 calls this season, with five team deployments. They have also lent a hand in fighting the Bruler; Middle Fork, Rough Patch and Skyline Ridge complexes; Elbow Creek and Grandview fires throughout the state. Part of the reason his team was called for assistance was because the state as a whole didn't fare as well at avoiding fires this summer.

This season has been "hotter and drier" than in past years, according to Calderwood. "We've been dealing with a drought for a number of years now," he said, "and this season, southwest and southern Oregon were in an extreme drought, so fuels were very receptive to fire. It was complicated to suppress some of those, because it was so dry."

But with fall weather underway, the ODF's website stated on Sept. 29 that "Fire potential remains low due to cooler temperatures and wet fuels, particularly on fires in the north and central Cascade Range."

The official end of fire season loosens public-use restrictions on open burning, so "people can catch up on burning some of their backyard debris. The end of the season allows for that activity to happen again," Caldwerwood said.

Still, the public can only legally observe specified "burn days" determined by the Department of Environmental Quality (DEQ).

"We still advise the public not to throw caution to the wind," Calderwood added. "Conditions can change, so people should monitor their debris-burning. Make sure after you burn that the fire is totally extinguished, because with east winds in the fall, you can still get a fire. Things can dry out rapidly."

He added that the opening of restrictions for the general public typically comes before the logging industry.

"We wait for a few more inches of rain before [they're] allowed to start conducting slash burning of the debris left over from their harvesting," he said. He emphasized, however, the importance of slash-burning, because "Once spring and summer time comes, the debris from the logging operations can act as extra fuel loading for fires."