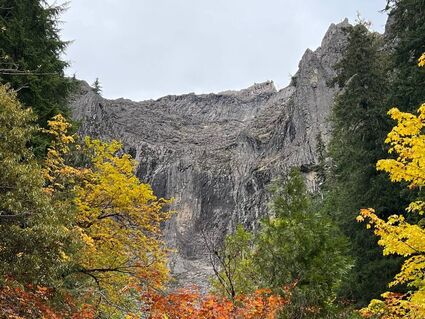 Four agencies rescued a climber at Wolf Rock on Saturday. The monolith is recognized as Oregon's largest, rising nearly 1,000 feet above the surrounding area.

According to a news release, Linn County Dispatch received a 911 call shortly before 6 p.m. from 23-year-old Johnathan Takle who became stuck during a technical climb up the Wolf Rock cliffs and his gear fell to the ground. Takle used his remaining gear to anchor himself and call for help.

The Linn and Benton County sheriff's offices, Corvallis Mountain Rescue and the Sweet Home and Lebanon fire departments responded to the rescue and worked through the night to bring Takle dow...