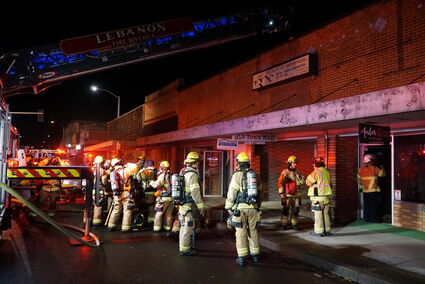 Firefighters work an active fire Saturday night at the Old Town Mall in Lebanon. The blaze caused an estimated $50,000 in damage.

A two-alarm fire at a downtown Lebanon retail shopping center caused an estimated $50,000 in damages Saturday, Nov. 6, although responding crews from multiple agencies made quick work of the blaze, according to a Lebanon Fire District news release.

The fire in the partially occupied 7,500-square-foot Old Town Mall at 743 Main St. was first reported at about 6:15 p.m., after an employee in one of its stores heard a loud pop from a business with a common wall. When he went to investigate, he determined the noise's source as a series of interior lights flickering and popping in the Amber Moo...