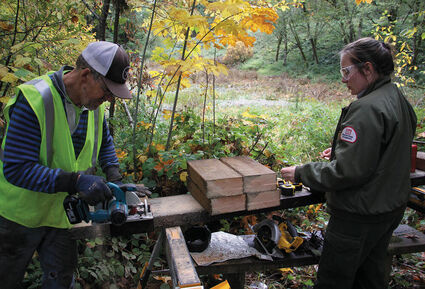 Ken Bronson, left, cuts a brace for a new bridge on the trail along the north side of Foster Lake as Stephanie Torres watches.

The U.S. Army Corps of Engineers last week replaced a bridge on the trail along the north bank of Foster Lake that had been literally "falling apart," according to a local resident, who brought it to the Corps' attention three years ago.

Thanks to rotating assignments within the agency and the arrival of COVID-19, it took that long to get the bridge replaced, but Ken Bronson was there to help when the materials arrived.

He and several rangers began assembling the structure Oct. 29 and finished last week.

"We had this old bridge – I'm not sure when it was built, but the railing had r...