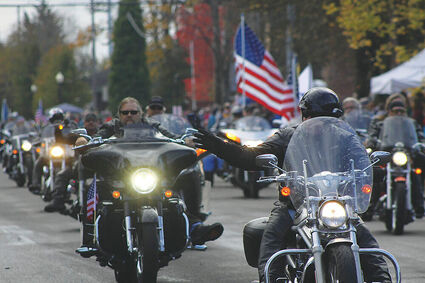 Motorcyclists ride in a previous Veterans Parade. Although the parade will not wind through Albany, cyclists will ride from the Memorial Service at Timber-Linn Park (see below) to the Veterans Home in Lebanon.

Will there be a Veterans Day Parade in Albany this year?

This year, which marks the event's 70th anniversary, the parade event will have a different look. Instead of traveling the usual route through Downtown Albany, veterans and floats will be hosted by sponsors at sites around town and spectators will view the entries after traveling to those sites.

"We wanted to do it a little later so people could do both the memorial service (see below) and the parade," said organizer McCall Washburn.

Participants will use a map – either a hard...