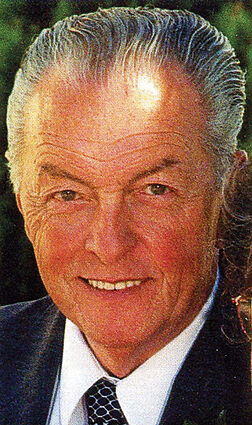 He lost his father in combat in World War II. Later, his mother married Gordon Carlson of Fredrick, Wis., who adopted him. When he was in seventh grade, they moved to Canby.

Dr. Carlson opened his own practice in Enterprise (Wallowa County), where they raised their three children. His practice prospered and he added delivering babies at home, which turned out to be his favorite part of his practice.

He also did house calls – often on his motorcycle during his lunch break, his doctor's bag secured behind him.

The Carlsons accepted the Gospel invitation when it was presented to them in 1978 and both remained faithful to God and His promise of salvation through following His Son Jesus Christ all the rest of their lives.

In 1997 Dr. Carlson sold his practice and moved to Lebanon to be closer to their children and to care for his wife. After Linda died in 2001, he moved to Sweet Home. He met Mary Elsberry of McMinnville at their annual fellowship convention and they were married in 2003. They resided in Sweet Home until his death.

He was preceded in death by his first wife, Linda; parents Richard Wamsley, and Gordon and Eve-slyn Carlson; and brother Lee Carlson.

A private service will be held for close family and friends. A graveside service will be at 2 p.m. Saturday, Nov. 13, at Lewis Cemetery. Condolences can be sent to Mary Carlson in care of Sweet Home Funeral Chapel 1443 Long St. Sweet Home, OR, 97386.