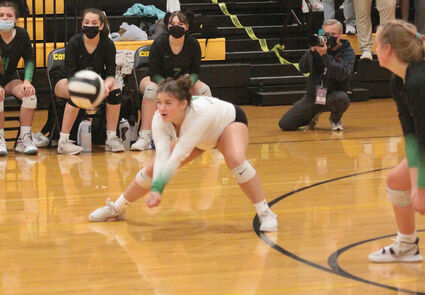 Libero McKayla Guthrie digs a ball out in the back row.

Sweet Home volleyball's season came to a close Tuesday, Nov. 2, in the 4A state quarterfinal, as the seventh-seeded Huskies fell to second-ranked Cascade 25-21, 25-15, 25-18 on the Cougars' home court.

Four days later, Cascade would win the state championship, beating No. 1- ranked Sisters in five sets in the title match.

Sweet Home finished the regular season 12-6 overall and 9-3 in league play. They rolled over 10th-ranked Junction City in the round of 16 before losing to Cascade.

The quarterfinal match wasn't Sweet Home's first showdown with the Cougars. They lost to the state champion...