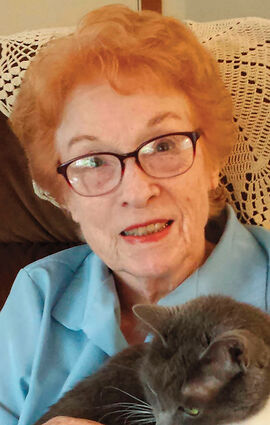 She was the middle child of three, with older sister Reva Jo Jeffreys and younger brother George Hughes. Another sibling, Norma Gene Hughes, died at an early age.

During a tumultuous time of union unrest in Illinois, her father brought the family to the small logging town of Sweet Home.

Mrs. Martin grew up with a great appreciation for nature. Her gardens were always abundant and beautiful. Her love of animals, especially cats and birds and anything that wandered into the yard, kept her intrigued with every new day. And she was such a rockhound; visitors could find remnants of what she found in her travels everywhere in the house or yard. She said, at one time, that she would have liked to have been an archeologist.

Her education at the University of Oregon was in secretarial science and liberal arts. She worked in the secretarial pool for General Electric and then as a lab technician at Hanford Lab during World War II.

She also collected people. Her zest for life showed up in her walks with friends, where she would some times spontaneously break out in song along the way.

She also loved dancing, crocheting, playing the piano and helping people organize functions like Bingo. And her sense of humor made her fun to be around. She even participated in a TikTok video with her granddaughter, great-grand-daughter and daughter.

Maxine was known to be humble, positive, friendly and helpful. She enhanced the life of everyone she came across.

Due to the COVID threat, there will be no physical gathering in remembrance of Mrs. Martin.

So, instead of a big gathering, her wishes are that any expense of flowers, or the like, be better spent on a small family meal where she is just a small part, but a happy topic of conversation.