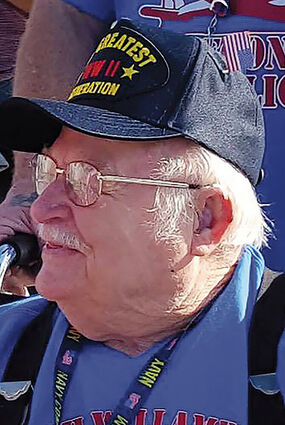 Mr. Garrett moved his family to Oregon after serving in the Navy during World War II.

He and his first wife, Gloria Schmidt Garrett, moved to Sweet Home to raise their four children, Bruce, Elaine, Sherrie and Lorrie.

After Gloria died, on Feb. 10, 1975, Mr. Garrett married Morine Moore, who had three children, in 1976. After retiring as a millwright for a particle board manufacturer, originally the Cladwood Co., he and Morine traveled in their motorhome for 19 years, to jewelry and gem shows which he loved and where he enjoyed meeting people.

Mr. Garrett enjoyed playing card games with family and friends. He was always happy to see his kids, grandkids and great-grandkids.

He was a proud member of the South Willamette Valley Honor Flight to Washington, D.C., in October 2017, accompanied by his son, also a Navy veteran.

Mr. Garrett is survived by his children, Elaine and son-in-law Jerry Manasco of Portland, Bruce Garrett of Albany, Sherrie Peder of Lebanon, and Lorrie Curtis of Grand Prairie, Texas; his sister, Phyllis Garrett of Kansas; brothers Willis Garrett and Rowe Garrett, both of Kansas, seven grandchildren; and two great-grandchildren.

He was preceded in death by his wife, Gloria Garrett; his parents, Ray and Olive; brother Reed; and second wife Morine Moore Garrett.

A service with military honors will be held at Gilliland Cemetery on a date to be determined.