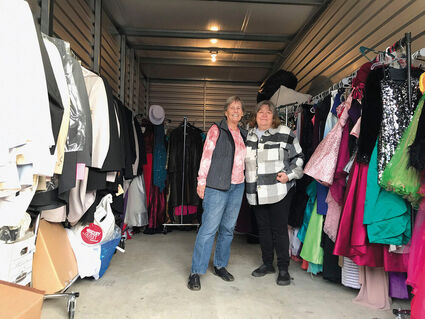 Partners Karen Craig, left, and Shirley Austin stand in their storage unit, which contains thousands of costumes and formal wear, which they hope to turn into a nonprofit store to serve the needs of the community.

Shirley Austin and Karen Craig are busy, the day before Thanksgiving, doing what they love: outfitting teenagers who will serve as ushers at the Christmas Gala concert Austin is producing on Saturday, Dec. 11, in the auditorium of Sweet Home High School.

Next to a table piled with tuxedos and other formal wear, Craig takes measurements of Interact Club members Megan Baham, Killan Boggs and Jenna Wolthuis while Austin holds up outfits, analyzing them with a critical eye.

"Did that shirt fit?" she asks Boggs.

Craig and Austin, who share an attachment to theater, particularly musical theater, have embarked on a joint endeavor to provide classy clothing to Sweet Home residents who need it for special occasions.

"We probably have accumulated 200 formal gowns now and all these tuxes," Austin said.

They've formed a business, La La Land of Sweet Home, named after the 2016 film musical about a jazz pianist and an aspiring actress.

The pair are not strangers to those interested in the arts in Sweet Home. Austin has been producing shows for years in east Linn County and she teamed up with Craig after the latter moved to Sweet Home seven years ago.

"We found out we both had a love of Broadway and all this stuff," Austin said, noting that they have season tickets to the Broadway Across America shows scheduled at Portland's Keller Auditorium.

Craig spent 12 years as a board member for the Chino Children's Community Theater in southern California, where she worked as a controller for a chemical company.

"(Theater) was my hobby and my kids got into the children's theater, so that got me into it," she said. "They grew out of it but I didn't."

When she moved to Sweet Home, she said, she "left a lot behind, but I brought some of my favorite costumes with me."

She put out the word that she was interested in theater when she arrived, and somehow – she doesn't remember how, exactly, she ended up meeting Austin.

They hit it off.

"We both love that kind of thing, and then we discovered that I'm, like, only 29 hours older than her," Austin said. "Her birthday is the day after mine, in the same year, and we both graduated in the same year, 1970."

"We have a lot in common," Craig said. "We think the same way, we work well together. I can't reach my arms (over her head) and she can't bend..." she added, chuckling.

Craig designed costumes and masks for performers in the 2019 Chips 'n' Splinters show that Austin produced, based on "The Masked Singer" TV show popular at the time.

"She does the sewing," Austin said.

Meanwhile, they've collected formal wear and costumes as they've moved along, and they hit the jackpot earlier this year when they discovered that a tuxedo warehouse in Roseburg was going out of business.

They've made multiple trips, returning with vehicles full of evening wear. Not to mention all that theater attire.

She said a lot of costumes now come from alterations to regular clothing.

"In the summer time we go to a lot of yard sales and thrift stores," she said. "A lot of this stuff is brand new. People just don't use them. So we buy them, clean them up, sew them up, whatever we need."

"We have costumes for just about any show you would want to do," Craig said.

"So we decided that somebody should get some use out of these," Austin said of the collection. "Of course, my passion is Sweet Home and the things that go on here. So we thought it would be a good idea just to provide costumes for any community or school event or productions."

She said the enterprise would be "basically nonprofit," so they have to find a location they can afford.

The two have rented a large storage locker and they're working on getting the collection organized.

"I'm thinking it's gonna be a long, cold winter, so yeah, having space in there will help," Craig said. "It's hard work – I mean, costumes are heavy and bulky. So this particular unit is nice because they're more spread out. Before, we had to pull things out and spread them down a hallway to even get to them and now we're gonna have a lot more opportunity."

They recently outfitted attendees at the Military Ball at the Sweet Home Veterans Club, simply charging a $10 cleaning fee.

"Most of the men wear their uniforms, if they can. There were a couple of tuxes that were needed," Craig said. "But the ladies, they just don't want to go spend $100 on a dress. So we took a bunch of them over there. I guess there were several people who attended who wouldn't have otherwise.

Hopefully we can continue to do things like that."

They eventually hope to rent a downtown storefront, where they can rent apparel at reasonable rates to fill needs.

Austin said that while she doesn't necessarily expect audience members to dress up for the gala concert,  which will include a variety of established local performers, headlined by rising country music performer Jessie Leigh, that option is there.

And the performers will be dressed to the nines, she promised. 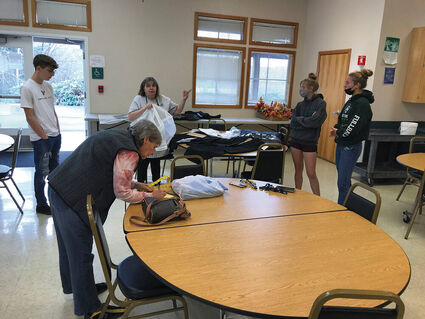 Proceeds from the show, which will be at 7:30 p.m. on Dec. 11, are going to the Sweet Home Oregon Coalition for Artistic and Scholastic Enrichment (SHOCASE) and local businesses. Details are available at christmasgala.eventbrite.com.

"Hopefully, this will be an annual thing," Austin said of the performance.

Both hope to see community theater get a foothold in Sweet Home and Craig is big on children's theater.

"We have a Theater Committee within SHOCASE," Austin said. "Obviously, we haven't been able to do a lot with it. But eventually I'd like to add children's theater too, especially since a lot of what SHOCASE supports is arts for children."

Craig said she'd really like to see local children's theater in the community.

"What a wonderful experience for the kids, for the parents, for the community," she said. "It is just really awesome."