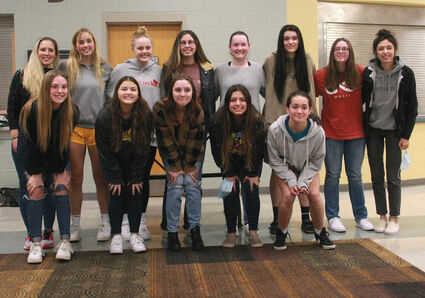 Volleyball team members stand for a final photo following their awards banquet. Jamie Seward, second from left in rear, was Player of the Year.

The 4A Oregon West Conference distinction has been given to a Husky player in each of the last five seasons, according to head coach Mary Hutchins,

She described Seward, who plans on playing volleyball at Austin Peay State University in Clarksville, Tenn., as "sweet and humble."

When a "D1" chant broke out at a Sweet Home home game this season, Seward turned around after she hit the ball and said "I don't like that," Hut...