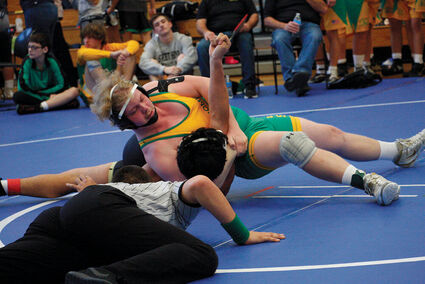 Tucker Weld works for a fall against Jorge Martinez of McKay.

Thirteen Huskies scored a total of 175 points to finish behind McKay (22 wrestlers/236 points) and ahead of Thurston (14 wrestlers/159 points).

Seniors Paige Chafin and Kami Hart were the top finishers of the day for Sweet Home, Chafin taking first at 125 pounds...