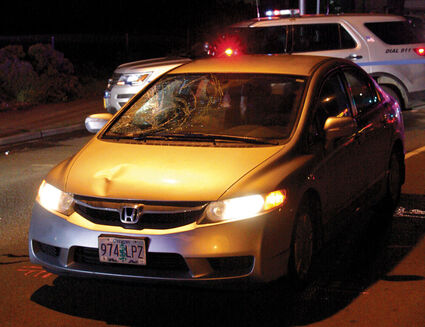 A Honda Civic sits on Main Street after it collided with a teenager who was crossing the road in the dark.

A 15-year-old Sweet Home girl was injured Tuesday, Dec. 7, after being struck by a car in the 1600 block of Main Street, the Sweet Home Police Department reported last week.

City police and fire personnel responded to the scene shortly after 5:30 p.m.

The youth, who was not identified, was taken to the Good Samaritan Regional Medical Center in Corvallis for treatment. Her injuries were described as non-life-threatening, according to police.

The girl was walking when she was struck by a 2009 Honda Civic driven by 41-year-old Sudip Lamichhane of Lebanon. Lamicchane is cooperating with investi...