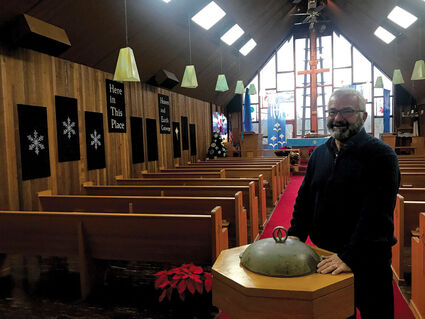 Pastor Joe Medley stands in the sanctuary at Fir Lawn Lutheran Church, where he's served since 2009.

Joe Medley's 12½ years of service as a pastor in Sweet Home have been, in a word... well, it's kind-of hard to explain in a word.

Medley became pastor of Fir Lawn Lutheran Church in September 2009, working as a tile contractor on the side.

In 2014 he was approached by the Sweet Home United Methodist Church, which had been lacking a pastor, and agreed to take on that role as well – at both churches.

In 2012, recognizing that his Fir Lawn flock was aging – "congregations like ours, once blessed with many camp-age members, now find we have none," he said at the time – instigat...