Girls improve to .500 in hoops with win over Yamhill-Carlton 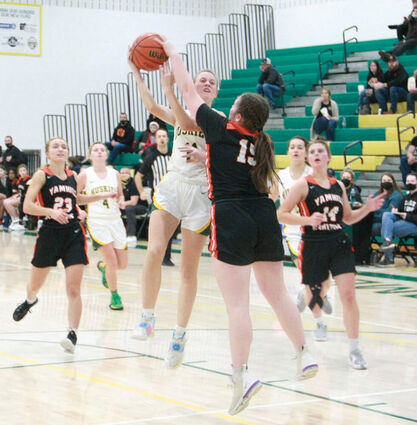 "We've been in similar positions to that game several times this year, where it was neck and neck - a really close game all the way to the end," said Head Coach Michelle Knight. "It was great to see us come out and win this one." Chloe Fairchild fights her way to the basket against Yamhill-Carlton.

"We made some mistakes along the way, but we moved past them pretty quickly," the coach continued. "We held our composure really well, and hit most of our free throws in the fourth quarter, when it mattered."

Junior Brooke Burke led the team in scoring with 17 points on 6-17 shooting from the field. She went 2-5 from beyond the arc and made 3-4 free throws.

Senior Adaira Sleutel earned a double-double, scoring 13 points while collecting 19 rebounds. She converted at a 50% rate from the field, hoisting up 10 shots. The senior went 3-4 from the charity stripe and was a presence on defense, grinding her way to five steals and one block.

Freshman Kaylynn Mamac added six points for the Huskies on a perfect night of shooting, going 3-3.

The girls now turn their attention to the SCTC Holiday Classic at Stayton High School, where they first square off against Cottage Grove (3-4) at 3 p.m. Tuesday, Dec. 28.