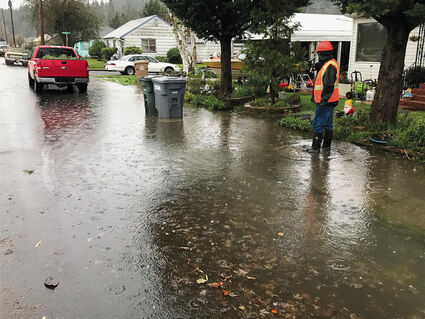 Streets crew leader Brian Womack checks out flooding near the corner of 7th Avenue and Ironwood.

The Christmas snow may mostly be gone, but the mid-Willamette Valley wasn't yet finished with its early-winter outburst over the weekend, bringing Oregon's usual downpours in droves, plus a helping of gusty winds. City Public Works staffers spent Monday morning troubleshooting drainage problems in the Avenues.

The National Weather Service issued a winter storm warning Monday, which was expected to remain in effect until early Tuesday afternoon.

A declared flood warning Sunday covered the cities of Albany, Corvallis, Lebanon and Sweet Home among others throughout the state.