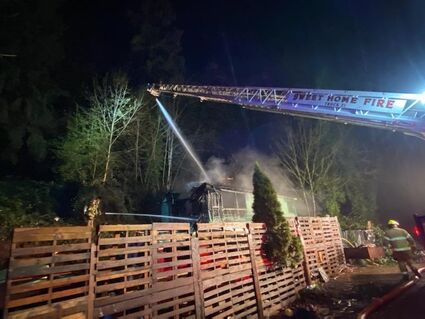 Four agencies work early Thursday morning at the scene of an unoccupied-house fire in the 40000 block of Highway 228 south of Sweet Home.

According to the Sweet Home Fire District, a passerby reported the incident shortly after 3:40 a.m., describing flames in the structure's second story and vehicles in the driveway. The agency immediately dispatched an engine, an ambulance, two water tenders, a ladder truck and three chief officers.

The first unit came upon a fully involved conflagration with, as a news release stated, flames 10 to 12 feet above the home's roof and venting out the windows. A second alarm summoned additional tenders and personnel from Lebanon, Brownsville and Mohawk Valley.

An unidentified occupant arrived and told Sweet Home's incident commander that the house was vacant, although he'd been inside using its wood stove about an hour earlier.

Due to the structure's instability and the blaze's intensity, crews fought the fire defensively, using the ladder truck's elevated stream to overhaul the house.

"This tactic was successful," the Sweet Home agency reported, "and was only possible as a result of the mutual aid assistance from neighboring districts which allowed crews to maintain an adequate water supply in an unhydranted area."

No injuries were reported.

The fire's cause is unknown, although it's believed to have resulted from a chimney fire originating from the failure of its lining and a build-up of creosote.

See the Jan. 12 issue of The New Era for more photo coverage.