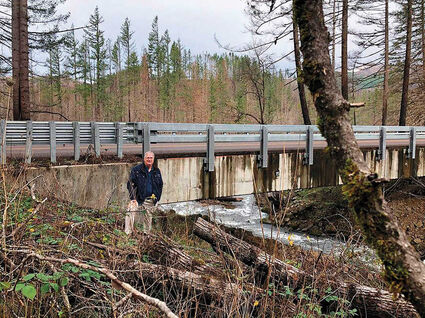 Chuck Knoll stands next to one of the many bridges his staff has completed in his 16 years.

Although Linn County Engineer Chuck Knoll's last day of work was Dec. 31, his list of planned activities will keep him busy for a long time to come.

He also has a few fish passage projects he would like to see completed in the Cascades.

And those are just a few items on his agenda.

Knoll, 72, held the local engineering post for 16 years and brought a broad range of experience to the job – including working in Idaho, Washington and Alaska.

Knoll was born in The Dalles and lived in Klamath Falls, Pendleton and Bend before his family settled in north Seattle when he was 8 years old.

He was fortunate that his grandparents owned the Shelter Cove Marina and store on Odell Lake from 1948 until 1972 and he got to spend summers working with them.  He said the experience was "fantastic."

To help his grandparents out with the business, he "ran trap lines, shoveled snow, cut firewood, painted and roofed cabins, pumped gas, and managed boats in the marina, played the trumpet in the boat house, and had a great time," Knoll said. "Oregon Fish and Wildlife was also set up on the west end of Odell Lake and I often visited them and was invited to participate in stream surveys. As a result, I have been and am still involved in fish and wildlife aspects of my work and fun time."

It's also where his love of being on and around water originated. He has sailed and canoed on the Puget Sound, the Skagit, Alsea, Des-chutes, Skyhomish, Snoqualmie, Lewis and Willamette Rivers and many other creeks and lakes.

Knoll didn't have a clear career choice when he entered the University of Washington, but an adviser suggested that his summer jobs and passion for the water might bode well in the field of civil engineering.

As a result, Knoll earned a degree in Civil Engineering in 1971 and had the opportunity to enter graduate school. He earned a Master's Degree in engineering hydraulics and water resource management in 1973.

Standing 6-foot-3-inches, Knoll also found himself drawn to the University of Washington rowing team and he competed from 1967 until 1971 on squads that would win numerous national titles.

Knoll's career eventually brought him to the City of Salem Department of Utilities, then the Oregon Department of Environmental Quality located in Eugene – where he also coached the University of Oregon's men's rowing team from 1975-1978.

He worked as a process engineer, and then environmental program manager at Teledyne Wah Chang from 1978 until 1999.

He was the senior engineer at Benton County Public Works from 1999 until 2005 where he obtained funding, designed, permitted, contracted and provided oversight for 26 fish passage projects while there.

He came to Linn County in 2005 as the Linn County Engineer and developed, obtained funding for, and guided numerous projects throughout the county.

He is especially proud of the recent $9 million TIGER project in Mill City, a local and federal project that includes refurbishing the community's historic pedestrian bridge, the traffic-bridge over the North Santiam River and street improvements.

This is part of a list of over 40 projects with a total value of more than $80 million in which $42 million in outside funding was provided.  Part of this list includes obtaining funding and providing engineering design and contracting for the rehabilitation of five covered bridges.

Other accomplishments on this list have included obtaining funding, designing and obtaining environment permit approvals for eight fish passage improvement projects.  Knoll's favorite fish passage project was the replacement of a perched culvert with a bridge on Mad Creek on Gates Bridge East Road.

"The minute the stream was restored for fish passage about 200 salmon swam up the creek in the first hour," Knoll said. "It was nice to see the appreciation."

This does not include an additional 11 projects to complete with $19,500,000 in approved funding grants.  This list also includes another $3,620,000 in funding for the rehabilitation of the Shimanek Covered Bridge that is in line for rehab this summer .

In addition to the completed and presently funded projects, Knoll also has a few he would like to see completed including a bike and pedestrian bridge crossing I-5 next to the Grand Prairie Avenue bridge, a multi-use path next to Three Lakes Road from Grand Prairie Road to Spicer Road, as well as a bike path alongside the railroad from Albany to Lebanon, and the continuation of the bike path along Highway 34 from Riverside Drive to Linn-Benton Community College.

Knoll has been primary in development of the Stormwater Management Plan for Linn County, and a fish passage barrier inventory and restoration plan.  During the past 15 years the engineering staff have also developed and implemented a Certified Agency Project Delivery Program with the written approval of the Oregon Department of Transportation to deliver federally funded projects.  This program includes the development of a county-wide ADA transition plan, a Civil Rights program, Contract Conditions and Specifications to meet federal and state requirements, and approval to provide engineering design and delivery of bridge and road projects.

Linn County is the only rural agency that has all of these certifications.

Knoll also managed the development of update of the county's Transportation Plan in 2018.  This was all in addition to the routine workload which also included reviewing access and driveway permits, developments, and other problems that might come up.

Knoll said he is most proud of working with a dedicated and talented staff at the Road Department.

"Kevin Groom is one of the top covered bridge engineers in the entire Northwest," Knoll said. "I knew Daineal (Malone) when she worked in Benton County and she is a very good road designer and has good organizational skills for construction project management.

Other staff include Andrew Potts, another great bridge and road design engineer, and three engineering technicians (Dan Leard, Scott MacLean and Amanda Howe), who provide construction inspection to make sure the projects are completed as designed.

"Across the board, it's a great engineering staff that provide an efficient collaborative team effort," Knoll said.

Knoll actually retired on June 30, but has remained with Linn County to provide for a good transition and help take care of some of the workload.

Knoll has served on the Cascades West Commission on Transportation, the Albany Area Metropolitan Policy Organization, and the Oregon Association of County Engineers and Surveyors. He was named the "County Engineer of the Year" in 2017.  He has also worked with and assisted the Calapooia, North Santiam and South Santiam Watershed Councils which resulted in obtaining funding for fish passage improvement projects.

"Chuck has a larger-than-life personality and he has used his tenacity and skills to bring a lot of grant money to the Linn County Road Department over the years," Lane said. "He has definitely made an impact."

Both Knoll and his wife Terry are ready for his retirement. They have plans to continue to enjoy the northwest as well as a few trips and will be able to spend more time with their two grandchildren.

And then again, there are other projects on another list at home that need tending to. 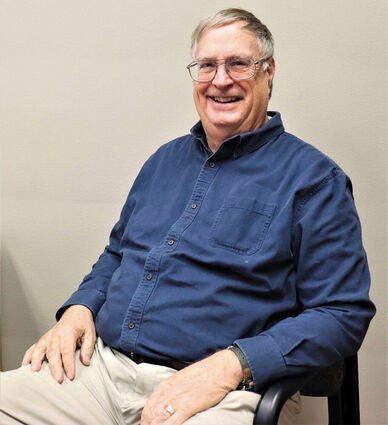