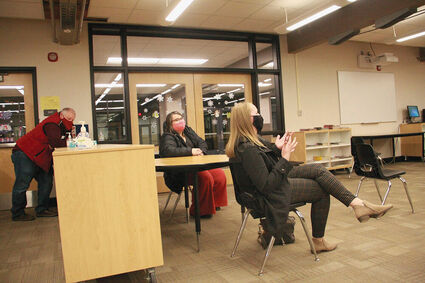 A "listening session" was held Tuesday, Jan. 4, at Sweet Home Junior High, allowing parents to interact with Sweet Home School District board members outside of regular monthly board meetings, where public comment can be limited.

It was the fifth such meeting in the district, as similar sessions have already been held at its four elementary schools: Foster, Holley, Oak Heights and Hawthorne.

Attendance has been paltry thus far, with no more than four parents at each session. Only one showed up for the junior high's: Cari Brewer, mother of seventh-grader Mailey and second-grader Henry.

Recounting the story of her children's education over the last two chaotic years, Brewer said that when the pandemic hit in March 2020, she and her husband, Daniel, initially enrolled them in Holley's distance learning program through the end of the school year. She appreciated the staff's effort during those turbulent first few months.

"Holley is an amazing school," she said. "The principal brought packets to us. If we said we couldn't do Zoom, he'd say 'Here's a packet you can turn in.'"

Still, the situation was still far from ideal for the Brewers, who both work full-time. They soon determined that "it was too much to handle working and doing Zoom meetings every hour," according to Cari.

So, the family opted to homeschool their children during the following school year.

"I wasn't sure what the district had planned for distance learning, and homeschool was way more flexible, so we decided it would be the best choice for our family," she said, adding that some other families had similar feelings. "For working parents, not knowing if school is going to be open or closed is hard. So they say, 'We're going to do this homeschool thing, and it's going to be consistent.'"

In the Brewer household, one parent would tend to homeschooling duties three days a week while the other worked two. They would switch roles the following week.

Daniel, who typically works weekends at Lowe's Distribution Center in Lebanon, would often work night shifts to have Friday off for the kids. Cari, who worked at the Linn County Health Department in Sweet Home at the time, would homeschool on weekends, while Daniel handled it during the week.

According to Cari, her children had separate reactions to this change.

"Henry really did thrive doing homeschool," she said, "but my daughter struggled so much, and begged every day to go back to school. If you are 12 and your mom tries to teach you math and you aren't getting it, it's hard."

It was hard for her as a parent, too, and board member Janice Albert sympathized.

"My kids are in their upper 40s, but putting myself in your shoes, I realize that would be very difficult scheduling and fitting it all in," Albert said. "It would be very hard to do a quality job."

Things changed when Holley returned to in-person learning in April 2021, when the Brewers re-enrolled their kids at the school.

"I'm glad to be back in person," Brewer said. "Homeschooling and working full-time outside of the house gave me a new perspective on what staff and teachers do every day."

She said Henry's experienced some anxiety about in-person learning, perhaps a result of being away from it.

"If you knew my son, you would never know he struggles socially with anxiety," she said. "Even yesterday when the alarm went off, he didn't want to go to school. I told him, 'You're going to be fine; remember your teachers,' but it was still hard to convince him."

But Mailey's grades have improved.

"Being in school helps her make connections," Brewer said. "She made the basketball team, and every day she was like, 'I gotta do my homework 'cause I want to play.' This is exactly what she needed – to be in school. Her grades were not that great while doing home school."

But Brewer knows many of the district's children still struggle from the pandemic's effects.

"You think about the first-graders now, the ones that missed kindergarten, and trying to get them to sit, get along and listen," she said. "You can't educate kids when you are constantly correcting social behaviors."

She didn't cast blame on the board, however, noting that mandates come from the state.

"It's not you guys making these decisions at the end of the day, but we have to go along with it," she said. "People forget that part of it. It's easier to get mad and share negative opinions and move on with life. But that's not helpful to anyone, especially the kids.

"It's easier just to complain, than it is to be willing to see a problem from the beginning to the end. We should remember that our common goal is our children and educating them, and sometimes people lose sight of that. It is easier to get on Facebook and complain than it is to be there in-person working on a solution."

This parent's word seemed to ring true in the context of her being the only one present at the listening session.

"I wish that more parents took the time," she said. "It's important to share your feedback and not just your opinion. It's so much easier now with Zoom meetings –  before I oftentimes could never make a board meeting. I know everyone is working, but the lack of parent involvement is concerning."

"Parents don't know how to get involved [sometimes]," she said, admitting, "It can be kind of intimidating, not knowing what to expect at a meeting or being worried about saying the wrong thing. I've always just kind of inserted myself wherever my kids are, trying to be aware of who my kids are around and what they are doing."

District superintendent Lisa Riggs said that the idea for the listening sessions came in part because some parents submit written questions to the board that are not addressed at its meetings.

"Some community members wonder why there is not a response at the board meeting. People really do expect a response," she said. "But if you look at business meetings and the laws around them, the law does not require public comment (at board meetings). Some district boards say public comments cannot be off topic of the board agenda, and make determinations for when it is not appropriate for board members to respond to people's questions, because meetings are meant to conduct important district business. These listening sessions offer a chance for the board to have interaction with parents that the community should and does expect."