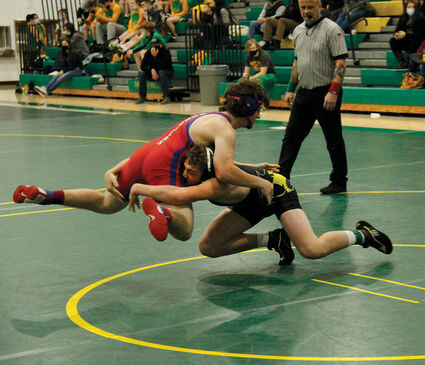 Ashton Swanson goes for a takedown against Lebanon's Isaac Reid in the 160-pound consolation semis of the Linn County Championships tournament Friday.

Sweet Home's boys wrestling team, like just about everybody else, has been dealing with sickness as well as the normal injuries and other hurdles that arise every season.

But the Huskies put on a good show Thursday evening against Tillamook, a perennial powerhouse in state 4A competition, downing the Cheesemakers 57-24, and then turning around Friday to take their seventh straight Linn County championship title in a tournament they hosted.

"We had a good week of wrestling," said Coach Steve Thorpe. "We took on one of Oregon's toughest teams and we beat them 10 matches to four."