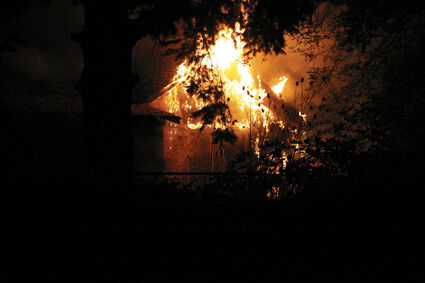 THIS HOUSE, at 1400 Nandina St., shown here on fire in September of 2021, burned for the third time Sunday morning.

An abandoned house northwest of Safeway burned for the third time on Sunday morning, Jan. 16.

Firefighters arrived at 10:54 a.m. at the property, 1400 Nandina St., which had also gone up in flames twice during the past year.

The structure was already deemed a "total loss" after the previous two burns. This time around, the flames were concentrated on a six-by-ten foot structure attached to the east side of the abandoned home.

Battalion Chief Eli Harris said officials suspect that a squatter's campfire in the building caused the fire, but noted that nobody was present at the scene for resp...