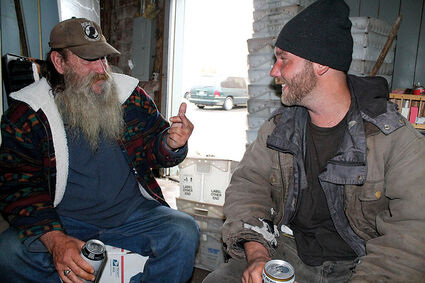 James "Jammers" Warrington, right, chats with a friend, Danny Rae Spurlin, while being interviewed for a story about homelessness in 2013.

Police Chief Jeff Lynn said the cause of death for Warrington, 43, was "unsure."

Inhabitants of the homeless encampment behind the old City Hall found Warrington in a tent, which was also occupied by another resident. Medics responded about 2:15 p.m. Friday.

"There was some concern that it could have been carbon monoxide poisoning, but that is undetermined," Lynn said. "We may never actually know the true cause of death. There are a lot of factors there."

Warrington was in poor health, having undergone a number of leg amputation surgeries, the most recent in the last few weeks.

He was a town "fixture" for many years, said Sweet Home Police Community Services Officer Sean Morgan, who is also the department's homeless liaison. In recent years, he was usually accompanied by a dog – the well-known "Oreo." who stayed beside his master as Warrington traversed the community in a wheelchair, often holding a can of beer.

"He had a lot of opportunities to make changes, but unfortunately, he never took advantage of that," Lynn said. "I would love to have had a different outcome."

Warrington arrived in Sweet Home in 2010 from the Portland/Vancouver area to help his mother take care of her place on Cedar Street, he said. His stepfather was working out of town on different jobs at that time, doing recoveries and RV repairs.

He would bring vehicles back to the house on Cedar to work on them, and he would give Warrington food and money to make sure he was fed.

His mother, who had been a needle junkie, had caught Hepatitis C, weakening her immune system, Warrington told Morgan in 2013, when Morgan was a New Era reporter. Warrington's mother contracted a staph infection, and "she ended up dying in my arms."

"After that my brain went a little haywire," Warrington said. He had a falling out with his stepfather and "he kicked me out of the house. Warrington was there until his death.

His dogs kept him company as he slept in doorways, on the library steps, on the back porch of houses, in parks and at his longtime buddy Danny Rae Spurlin's place in Foster. When the homeless camp was established, he stayed first at the Church of the Nazarene and then at the old City Hall.

The dogs,  Spike, and then Ruby, Roach and, finally, Oreo, a  border collie mix, were "somebody to talk to when you're kind of out of your mind," Warrington told Morgan in 2013.

Morgan said Warrington, who appeared at least once in front of the City Council to discuss homeless issues, "had an intelligence about him" when he was sober.

That was an issue. Lynn said the police had 611 contacts with Warrington during his time in Sweet Home.

"I was trying to get some services to him, get him off the street," Morgan said. "He had become receptive to it in the last year or so, but we weren't able to get him over the hump. He made a lot of choices along the way. I would have liked to see him succeed in his goals."

One of those, Morgan said, was – after years of encouragement from people in the community – to get into a more stable living situation.

Morgan said he and Warrington were discussing that topic the afternoon before Warrington's death.

"He had been talking about that for a while. He always used the term 'flat,' as in 'just a little flat for me and Oreo.'"