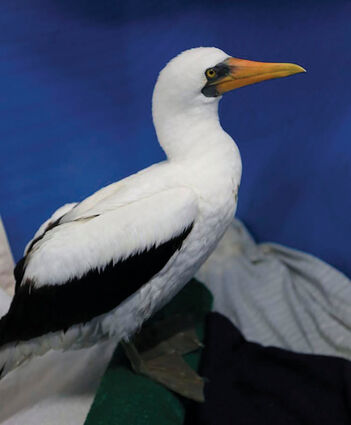 A rare (in Oregon) Nazca booby rests at the Oregon Coast Aquarium after somehow traveling some 3,000 miles to Newport from its native range.

A rare Nazca booby, found nearly 3,000 miles from its native range, is on the path to rehabilitation and release after receiving care at the Oregon Coast Aquarium.

The bird was initially found on the docks of Newport's bayfront. A member of the public was able to retrieve the bird and bring it to the aquarium.

"The range of this species of sea bird is typically along Central and South America," said OCAq's Curator of Birds CJ McCarty.

"This bird must have followed food and warm currents north and then gotten cold in our Oregon waters."