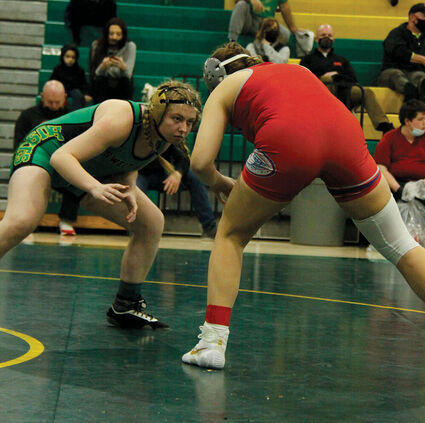 Kami Hart gets set to take down an opponent in a previous tournament.

Sweet Home hit a lurch in its wrestling schedule last week, but it wasn't in the win-loss column.

With illness sweeping through, the boys' Conference Duals meet at Stayton was canceled on Wednesday, Jan. 19, and the girls' duals competition at Dallas was canceled Friday.

"I basically shut my wrestling room down for a couple of days," Coach Steve Thorpe said.

However, Dallas did host an open girls tournament Saturday, and the Huskies responded with five placewinners and a tie for second as a team.

"These girls sure responded," Thorpe said. "Their first practice was Friday, after they cam off the Oregon Classic with a great finish there. Then they showed up Saturday and absolutely competed their tails off."

The Huskies finished tied for second with St. Helens, with 105 points each, behind first-place McKay, which fielded 22 wrestlers and scored 182 points. Sweet Home had 10 in the competition and St. Helens had nine.

Kami Hart led the finishers with a championship at 170 pounds, pinning her two opponents.

"Kami is really starting to blossom," Thorpe said. "She's getting better every time. She really works hard at it."

Paige Chafin bumped up a weight class to place second at 120, losing in the final to defending state champion Haley Vann of Cleveland.

"Kaylene and Zoey and Kendra, those girls have just competed their tails off. They're starting to get the benefits of it," Thorpe said.

This week the girls will be off, but the boys will have a busy schedule, hosting Junction City, Stayton and Willamette at 5 p.m. Thursday. On Friday, the varsity wrestlers will travel to Liberty High School for the Reser's Tournament of Champions, which runs Jan. 28-29.

Spectators are not allowed Friday until the semifinals, which are expected to start around 4 p.m. Wrestling on Saturday starts at 10 a.m. and spectators are allowed.

Meanwhile, a second team will travel to Harrisburg Friday for a series of duals.