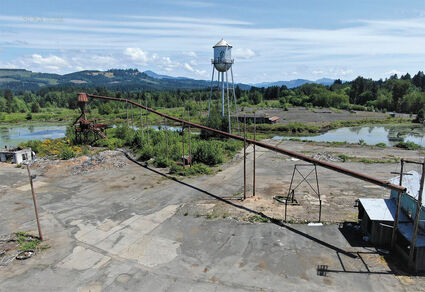 County Property Manager Rachel Adamec told the commissioners the Sweet Home Mill Site bid did not comply with bidding criteria. Adamec said materials submitted to the county by Sweet Home Mill Site after the bidding deadline were not opened and could not be considered.

Josh Victor, owner of Sweet Home Real Estate Restorations, said after the meeting that he intends to begin the process of developing a road system to provide access to the neighboring property Linn County has already given to the city of Sweet Home, the former Morse Bros (Knife River) rock quarry. The city plans to create a venue for the Oregon Jamboree and other community events at the 250-acre property.

Victor said his plans include both housing and commercial development of the 154-acre property.

Board Chair Nyquist provided a short summary of the history of the property, noting that in 2010, Linn County received the property in lieu of more than $500,000 in back taxes per state statutes. Nyquist said former County Assessor Mark Noakes gave owner Dan Desler of Western States Land Reliance Trust numerous "last chances" to make tax payments before the county was forced to foreclose.

Nyquist said the county realized an environmental assessment was needed at the site and that was accomplished with a $360,000 grant from the Department of Environmental Quality. The county has been working with environmental agencies since that time and has mitigated most of the areas of concern.

Commissioner Tucker has previously said he believes the remaining areas of concern could receive an environmental approval within a year if the mitigation process were to continue.