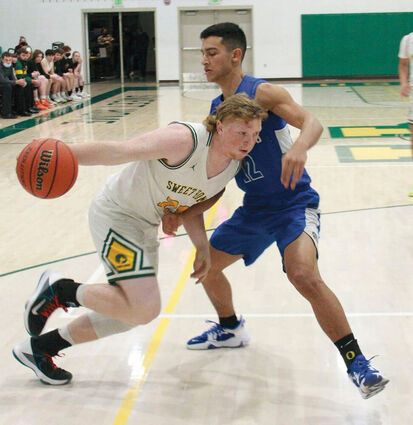 Sweet Home boys basketball (2-18, No. 32 in 4A) is still searching for its first league win after last week's action, with just four chances remaining before the season winds up on Feb. 22.

Despite the loss to Woodburn, Sweet Home's defense was effective in the game. The Bulldogs' 41 points ties their lowest scoring effort of the season.

Sweet Home only trailed 12-10 at halftime after what Head Coach Drew Emmert called a "crazy low scoring" half.

"If we could have hit some shots we would have had the lead," Emmert said.

"We struggled to score. These are good defensive teams, and we've been shooting a low percentage and not finishing well. Our defense is keeping us in games for a little bit, but we've got to find a way to score."

The coach put some responsibility on himself, saying "I need to do a better job at putting our guys in positions to score."

Both teams struggled from three-point land, with Sweet Home shooting 2-for-13 and Woodburn going 3-for-19 from beyond the arc.

Senior guard Russell Holly led his team in scoring with 11 points on 3-for-15 shooting. Junior Evan Towry scored five points in a 2-for-5 effort from the field.

Against Philomath, Sweet Home struggled mightily on offense, scoring zero points in the first quarter and just four in the second.

"They're super tough on defense and really big," Emmert said.

Evan Towry gets a shot off against Woodburn.

"We didn't score very well. We couldn't make shots. Against top of state teams, you've got to get shots.

"We have to run our stuff a little bit better to get open looks."

He noted that seniors Holly and Eddie Martinez are the only players who've played in varsity league games prior to this season.

"It's hard to catch up. But I'm proud of the way we keep working and fighting."

Sophomore starter Nathan Aker sat out against the Warriors with an illness, but Emmert expects he will be back in action this week.