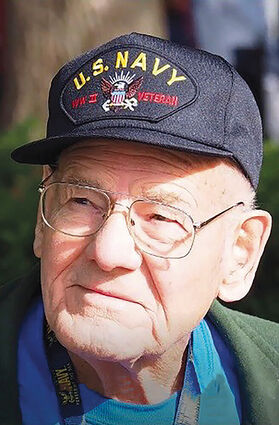 Bill was born June 2, 1927, in Winlock, Wash., the seventh of nine children, grew up in the Winlock and Napavine areas.

In 1943, two weeks short of his 16th birthday, he convinced his mom to sign a consent to allow him to join the United States Navy and help fight the war. He served on a merchant ship and traveled the world delivering supplies to the battleships.

Bill married his sweetheart, Phyllis Jackson, on April 19, 1946, and they moved to Sweet Home to find work shortly after.

Bill worked at Willamette Industries for a few years, but punching a time-clock did not suit Bill's independence and drive to do better in life.

He took on building homes in his spare time and selling them to make money to build another. Bill eventually began working in the woods as a choker setter, then became a timber faller, starting his own logging company in the early 1960s.

In addition to his logging business, Bill bought a farm in 1971 and moved to that property in 1974, where he raised Brangus cattle for many years, and served briefly as the state Brangus inspector.

He and Phyllis owned Yo-Deli Gardens Yogurt and Deli Cafe in 1986.They loved to travel, dancing was their passion, and spending time with family always a top priority.

In his youth Bill loved working on cars, and driving too fast in them.

He loved hunting for many years, and found fishing painfully boring.

Bill often referred to himself as dumb or uneducated, but if common sense came with degrees he would have earned a doctorate!

In his opinion, everything about Bill's life was perfect. His kids were perfect, his grandkids were probably better than perfect, the view from his kitchen, the Lincoln Town Cars he loved, the very old, very dusty, Ford Explorer that he let his perfect dog ride in were all perfect, at least for him.

He was preceded in death by both of his wives; his brothers Raymond, Dick, George and Roy; and sisters Myrtle Johnston, Grace Crandle, Henrietta Johnson and Ruth Casebolt.