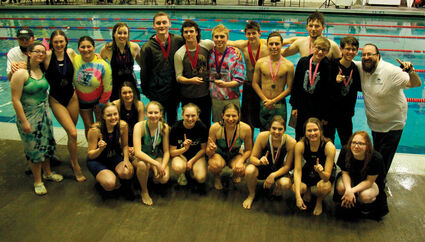 Husky swimmers and coaches celebrate a first-place district finish for the girls and a second-place trophy for the boys.

"They swam well," said Coach A Jay Bronson. "I think everyone who swam had at least one personal best."

The Huskies qualified all three of their girls relays for the state champions, as well as the boys 200 Freestyle Relay and 10 individual competitors on the girls side and three on the boys.

District champions for the girls were the thr...