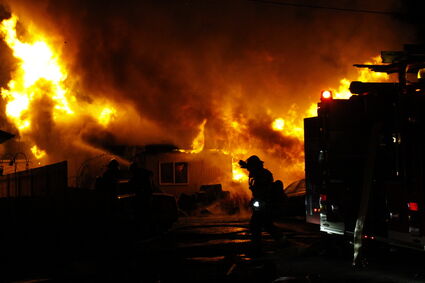 Firefighters battle an early-morning blaze that destroyed a home on Willow Street.

According to a Sweet Home Fire and Ambulance District statement, occupants of the home noticed an odor of smoke around 1:30 a.m. and located a fire in an attached pump house for the home's well.

Due to the freezing temperatures, they were unable to extinguish the fire themselves. They were, however, able to wake the other occupants of the home and evacuate them to safety, according to SHFAD.

The fire rapidly spread through the home, and within minutes it was fully-involved. The home is in a rare, un-hydranted area of the city, which hindered firefighting efforts, the SHFAD statement said.

The incident commander requested a second-alarm assignment, bringing mutual aid from Lebanon, Brownsville, and Halsey. Water tenders from Sweet Home and Halsey provided the water supply which allowed firefighters to prevent the fire from spreading to nearby homes that were threatened by radiant heat and wind-driven ember showers carrying large pieces of burning debris. Three vehicles in the driveway of the home sustained heat damage. Eighteen firefighters responded; no civilian or firefighter injuries were reported.

For more on this story, see the March 2 edition of The New Era.