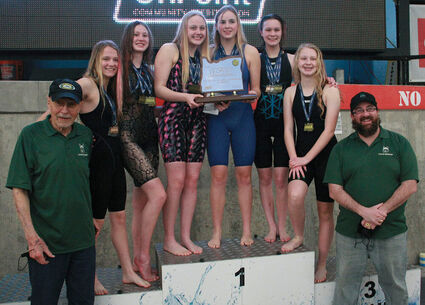 Sweet Home's girls hold the first-place state trophy after they won the 4A Division championship Saturday, Feb. 19, in Beaverton. Three seniors won five individual events, led by Chloe Tyler, who set a state record in the backstroke, and two freshmen joined them to win two relays and place second in another. It was the Huskies' fourth state championship.

Sweet Home's girls lived up to the expectations that have built as they've steamrolled through the swimming season, winning their fourth state championship Saturday, Feb. 19, at the Tualatin Hills Aquatic Center in Beaverton.

"The kids swam great," said Coach A Jay Bronson, in his first year as official head coach. "Our plans were pretty much spot-on. We hit where we needed to hit and made sure and accomplished what we wanted to."

It wasn't a runaway, but Sweet Home was in the lead from the beginning, opening with a win in the 200 Medley Relay and following that up with five individual tit...