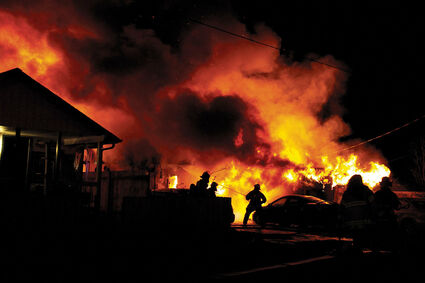 According to a Sweet Home Fire and Ambulance District statement, occupants of the home noticed an odor of smoke at around 1:30 a.m. and discovered a fire in an attached pump house for the home's well.

Due to the freezing temperatures, they were unable to extinguish the fire themselves. They were, however, able to wake the other occupants and evacuate them to safety, according to SHFAD.

Fire Chief Dave Barringer said the home's primary residents were Jessmon Pruitt and her son, John. County records indicate they are the owners of the property.

The fire rapidly spread through the house, and within minutes it was fully involved. The structure is located in a rare, un-hydranted area of the city, which hindered firefighting efforts, the SHFAD statement said.

The incident commander requested a second-alarm assignment, bringing mutual aid from Lebanon, Brownsville and Halsey. Water tenders from Sweet Home and Halsey provided the water supply, which allowed crews to prevent the fire from spreading to nearby homes threatened by radiant heat and wind-driven ember showers carrying large pieces of burning debris.

Barringer explained that the two tenders were called in because the nearest hydrant was some 1,500 feet away and across 18th Avenue, which would have stopped traffic on that street. Having a closer water source would not have saved the house, but it would have made it easier for firefighters to protect the nearby residences, he said.

"The fact that it didn't communicate to another home was the biggest issue," Barringer said. "I was not thrilled with the water delays. It was a little unnerving for [Battalion Chief] Shannon [Pettner]. It was a little touchy." 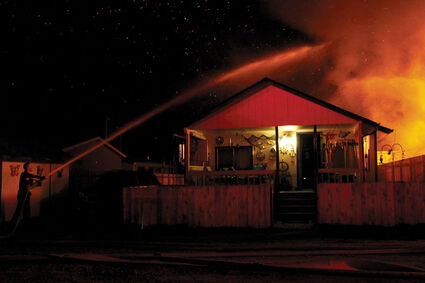 Police officer Sean Potter hoses down the house adjacent to the burning building.

Three vehicles in the driveway of the home sustained heat damage. Barringer said damage has been estimated at $135,000.

According to Barringer, the extent of the damage made it impossible to determine the fire's exact cause, but officials suspect it had to do with the cold weather.

"It was unintentional," he said.