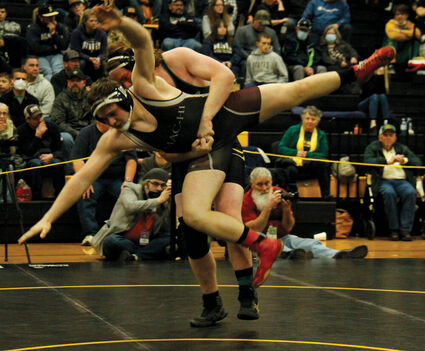 Colby Gazeley, rear, takes McLoughlin's Tanner Wells to the mat in their 220-pound final, which Gazeley won 4-2. To see more photos, visit our gallery at sweethomenews.com.

This year Sieminski's season has gone pretty much like one would expect for a defending state champion. He moved up a weight class and he took a 43-6 record into the district tournament, where things went awry in the final, as he lost in an upset to Philomath's Blake Niemann.

Sieminski said he didn't remember much about that match Saturday, Feb. 26, as he celebrated his second state championship, this time at 126 pounds, at the OSAA 4A Tournament hosted by Cascade.