Solutions sought to save Weddle Bridge 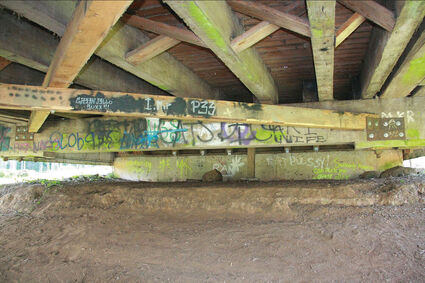 Graffiti underneath Weddle Bridge. Litter, decaying wood, missing boards, mud and dirt on the bridge's paint, and an abundance of people climbing on the structure has city officials pondering how to preserve Weddle.

Many Sweet Home residents use these words to describe Sankey Park's 85-year-old Weddle Bridge. Yet, increasingly, some residents don't seem to be treating it as such.

Its surface and siding, where entire boards have been removed, are smeared with mud and grime. Litter and food fragments are strewn about. The wood's been scarred with graffiti over the bridge's white paint. People often sit on the interior elevated "shelves," and it's not uncommon to see a person climbing to the highest reaches of its interior. Structurally, its wood is decaying, and aesthetically, some of the newly added boards have yet to be painted.

All of this has city department heads, staff and committee members scratching their heads to determine how to protect the structure, originally built in 1937 to carry traffic over Thomas Creek before being bypassed in 1980. It was moved to its current location over Ames Creek in 1989.

"It's a time capsule of our history and the culture of people who have passed through," Parks and Tree Committee member Bob Dalton said.

Such actions, Dalton added, demonstrated a "total disrespect for an icon."

"We can't always have someone here," he said. "And the thing is too inviting. It's beautiful. Without someone here monitoring, it's too easy to sit on and climb on."

He's considered "crime prevention through environmental design, so it's not comfortable to hang out on. Somehow we've got to have something that makes it so you can't sit on it anymore, but that doesn't detract from aesthetics."

Lynn also stressed the need for a quality surveillance system to catch perpetrators damaging the bridge.

While the chief admitted he didn't know the answer, he hopes to "figure out something that no longer makes it inviting" to sit and climb on the bridge.

He's brainstormed ideas that might keep people from making it dirty and contributing to structural damage. One would incorporate some type of Plexiglas along the structure's sides.

Another would cover the bridge with non-drying paint as a deterrent, a method Lynn said is used in Europe. He also suggested holding a hot dog cookout near the bridge, where organizers could speak with people hanging out about how vital the structure is. 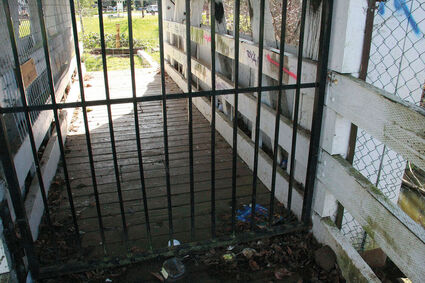 The much smaller Dahlenburg Bridge next to the Weddle Bridge has also fallen victim to graffiti and litter.

Since the bridge is a popular hangout spot for Sweet Home High School students, city Park and Tree Committee members have been thinking about ways the youth could become advocates for it, and the committee has considered reaching out to the high school's Youth Leadership Group.

While the City of Sweet Home has budgeted $5.1K in the current fiscal year for the landmark's preservation, Springman said it wasn't enough to get it the help it needs.

"We don't have an adequate funding source. We have a small funding source," he said, adding that an exhaustive restoration would be a "six-figure project, at minimum."

"We know we are going to have to sink a good amount of money to get it restored," Dalton explained.

He said that the Park and Tree Committee has discussed shutting the bridge down for a period of time, which committee members and city department heads don't want. They prefer that the bridge simply be treated with more respect.

"Ideally it's all free and open and everybody gets to enjoy it," Lynn said.