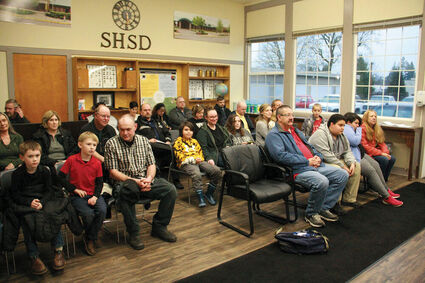 A maskless crowd attends the Sweet Home School Board meeting Monday night at the district headquarters. This was the first time since the beginning of the COVID shutdown that children were present for the ESPY awards, which will be announced in next week's edition of The New Era.

Sweet Home High School wasted no time in getting back to pre-pandemic programming on Monday, March 14, the first school day in Oregon since the state's long-held mask mandate was lifted on March 12.

The high-schoolers had a kick-off assembly to start spirit pride week.

High school math teacher Steve Thorpe said he had to help some kids figure things out in a procedure that was foreign to them.

"The only group of kids who had ever been to an assembly were juniors and seniors," he said at the Monday night's Sweet Home School District board meeting, noting how he directed freshmen and sophomor...