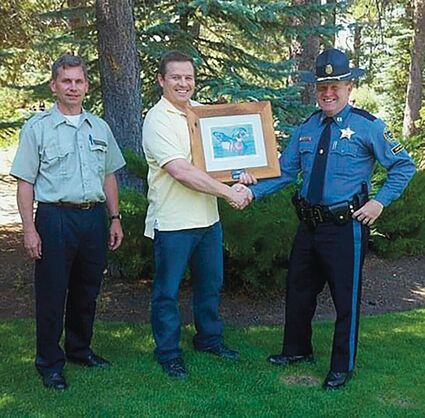 Jay Hall receives the Prosecutor of the Year award in 2010 from then OSP Fish and Wildlife Division Captain Jeff Samuels, along with ODFW Steve Marx (retired), who was the South Willamette Watershed Manager.

Poachers beware: There is a new force in the courts.

Jay D. Hall, hired last month as a new Assistant Attorney General with the Oregon Department of Justice, is serious about prosecuting fish and wildlife crimes.

The new prosecutor role is the final strategy of a three-prong approach legislators mapped out in 2019 to reduce poaching crimes across the state.

The first two strategies were: increasing detection of poaching through a public awareness campaign and increasing enforcement of wildlife laws by hiring additional OSP fish and wildlife troopers....