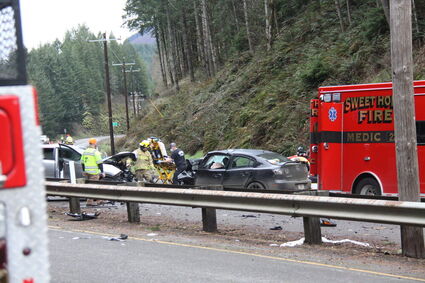 Rescue personnel work at the scene of a crash on Highway 20, next to Foster Lake, which left two people dead Friday morning.

Two people are dead after a two-car, head-on collision at the weigh station on Highway 20 in Foster just before noon Friday, March 18.

According to Oregon State Police, at approximately 11:25 a.m., OSP troopers and emergency personnel responded to the crash on Highway 20 near milepost 32 in Linn County.

Preliminary investigation revealed an eastbound black Mazda sedan, operated by Tawni Anderson, 27, of Lebanon, drifted into the westbound lane and collided with a gray Kia Sportage, operated by Gary Peppering, 59, of Sisters.

Anderson sustained fatal injuries and was pronounced deceased. Her passenger, Acea Anderson, 30, of Salem, was transported to an area hospital with injuries.

Peppering was transported to an area hospital with injuries. His passenger Greg A. Peterson, 56, of Redmond, sustained fatal injuries and was pronounced deceased, police said.

Highway 20 was closed at Milepost 32 for over three hours while the scene was investigated. The cause of the crash is under investigation, police said.

OSP was assisted by Sweet Home Fire and Ambulance District and by ODOT.