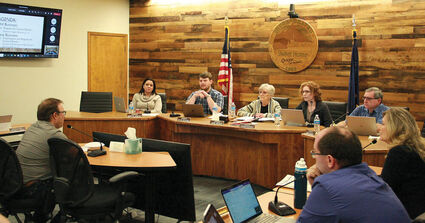 Developed by Eugene-based Dougherty Landscape Architects, the project seeks to establish a standard plan for landscaping, trees, lighting, signage, street furniture and parking in an area identified as the Main and Long street corridor between Ninth and 18th avenues.

Councilors began pursuing the project in early 2020, finally approving a contract with DLA in January 2021. Public meetings to solicit feedback were held that year in March, June and December.

"The goal is to make downtown Sweet Home a more appealing place for residents and visitors by beautifying the public right-of-way and making the area more pedestrian friendly," Community and Economic Development Director Blair Larsen said. "Private businesses and property owners will be able to capitalize on this increase in foot traffic by beautifying their own properties and increasing the offered products and services in the area."

He added that the plan allowed city staff to move forward with phasing and identifying potential funding sources.

"The key to those programs and grants is showing that you have a project that has been fully vetted by the public," he said. "That makes your project much more competitive, because funders don't like seeing a project get funded and then have the public demand changes midstream or even after it's done. Having that officially adopted document is really an important step for opening ourselves up to those opportunities."

DLA estimated the total construction costs at $7,700,720, but Larsen expected that the actual number wouldn't be that low because the figure did not account for relocation of utilities or stormwater quality infrastructure.

Larsen suspected that due to its size, the project would have to be split into portions.

"The full buildout of these plans is a very large undertaking and will require many years, cooperation from community partners, significant political will, and a big investment of public funds," he said.

He wasn't immediately certain where the city would secure funding but expressed optimism about opportunities in the Infrastructure Investment and Jobs Act, which was signed in November 2021, as well as state programs.

The current budget funded the plan's write-up within the city's economic development fund. In addition, the city received a $10,000 grant for the draft from the Oregon Cascades West Council of Governments.

-- The council voted 3-2 to approve a request for $15,000 to Radiator Supply House to help promote the Sweet Home Icebox Cook-off 2022, a barbecue competition scheduled on its property from July 2-3.

The money came from the city's economic development fund, and the city asked the business to promote the community and include it as an event sponsor, with logo, in return.

The $15,000 is an increase from the Administration, Finance and Property Committee's recommended suggestion earlier this month of between $5,000 and $10,000.

Councilors Angelita Sanchez, Susan Coleman and Dylan Richards voted in favor of the request while Dave Trask and Diane Gerson voted against it. Both said they supported the event but preferred a smaller amount.

Mayor Greg Mahler and Councilor Lisa Gourley were not present at the meeting,

The company hopes to attract more than 4,000 to this year's competition, which features a $30,000 payout to competitors. Jayson "Shag" Arrington of MotorTrendTV's "Iron Resurrection" and Craig "The BBQ Ninja" Verhage have both confirmed their participation. The event is estimated to cost $75,000, $25,000 of which has been raised by local business sponsors.

"We want to partner with Sweet Home and we think it's good for Sweet Home," Radiator Supply House co-owner Will Garrett said. "It will bring traffic. And I'm humbled with the outside businesses that are already seeing value in this.

"We look at this as a long-term investment that can help Sweet Home and bring business here and bring people here that are outside of the area," he continued. "We're already seeing people from out of state making their plans for spending Fourth of July here. We're just trying to add as much value as we can to bring as many people from out of town as we can."

-- The council voted 3-2 to put all economic development funds on hold until after the city's budget season, with the exception of commercial exterior improvement program (CEIP) grants. (This means that the city won't be entertaining new requests similar to Radiator Supply House's.)

Trask, Coleman, and Gerson voted in favor while Sanchez and Richards opposed.

"I'm pretty sure that the money in the economic development fund was not for these particular kinds of things," Trask said in support of the motion. "The purpose of why we put this fund in to begin with was to upgrade our downtown businesses and those kinds of things."

"I am not a fan of more red tape," Sanchez said. "I'm not necessarily sure why we would want to tie up anybody that wants to come and receive funding for economic development, whether it's for a storefront or to bring events to town."

-- The council voted unanimously to appoint a city manager through a council-approved selection process. The city's charter states that the council shall adopt a resolution of its intention to appoint, and that no such appointment be made until at least four weeks afterward.

-- The council voted unanimously to authorize staff to enter into an intergovernmental agreement with Oregon Cascades West Council of Governments (OCWCOG) for recruitment services to hire Sweet Home's next city manager, an amount that will not exceed $4,500.

As part of the agreement, OCWCOG will survey city council and staff to gather information on necessary qualities for the position; provide standards and criteria for its profile; identify and recruit candidates through advertisements, then make recommendations; develop interview questions with council input and assist in the selection and employment process, including reference checks.

The first round of interviews is set for May 26, followed by a second from June 8-10. The contract is planned to be finalized by June 28, with Aug. 1 as the new city manager's start date.

-- The council unanimously approved a public address system permit to allow the Oregon Jamboree's Music and Brews to play amplified music between 5 and 11 p.m. Friday, April 15, and 4 to 10:30 p.m. Saturday, April 16, in the private parking lot at 1306 Long St.

The event will include food and merchandise vendors, face-painting, a balloon artist, local artisans and alcohol service. The Ore-gon Jamboree is working with the Sweet Home School District to provide some camping opportunities. Some 1,000 people are expected to attend, according to a request for council action submitted by Police Chief Jeff Lynn.

-- The council unanimously approved a 347-square-foot temporary construction easement and a 133-square-foot permanent easement on city-owned land, allowing the Oregon Department of Transportation to construct improved American with Disabilities Act ramps at First Avenue and Main Street at Clover Memorial Park. The project is part of ODOT's effort to update these ramps to meet state current guidelines.

ODOT is giving the city $2,100 in compensation and will pay title and recording fees, as well as other administrative costs. According to Engineering Technician Trish Rice's RCA, the project's impacts upon the public's enjoyment of Clover Memorial Park were negligible.

-- The council voted unanimously to authorize the surplus and sale of existing police and public works department capital assets that have exceeded their useful life. They included, among other items, six vehicles, a snowplow and a vacuum blower.

-- The council voted unanimously to replace the police department's current access control system with an updated, web-based system that matches the platform at City Hall.

The Sweet Home Police Department's facility at 1950 Main St. was constructed in 2000 and included an access control system that provided the department with a controlled facility and a system driven by a computer terminal to activate entry points and trigger door locks. The 22-year-old system runs on a Windows 7-based personal computer and cannot be upgraded.

The replacement's estimated cost is $55,542. To fund the upgrade, a supplemental budget is being made to increase the police department's expenditure authority from $3,515,963 to $3,590,963. Forecasted excess revenue received from current year property taxes will be used to offset the increase in expenses, according to Finance Director Brandon Neish's RCA.

"Child abuse and neglect is a community responsibility affecting both the current and future quality of life of a community.

"Communities that provide parents with the social support, knowledge of parenting and child development and concrete resources they need to cope with stress and nurture their children ensure all children grow to their full potential ...