Seniors, police back on the beat 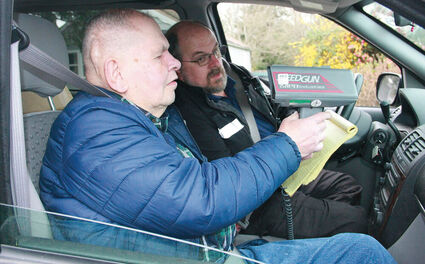 After a two-year COVID-19 hiatus, the Seniors and Law Enforcement Together council is back up and running, and one of its members, 77-year-old Leo Singler, was ready.

In fact, he joined the Sweet Home Police Department last year as a volunteer. As the pandemic began declining, he asked about SALT.

The SALT program unites local law enforcement officials and senior citizens, allowing the entities to connect on a personal level and share information on staying safe.

"It has been an important and key part of our relationship with the Senior Center and the seniors in this community for many years," SHPD Community Services Officer Sean Morgan said.

It's been active in Sweet Home for several decades now. But its roots are national, launched in the late 1980s through the Triad partnership, a coordinated effort by the American Association of Retired Persons, International Association of Chiefs of Police and National Sheriff's Association. The first Triad was established in St. Martin Parish, Louisiana, and has since spread to communities throughout the U.S.

According to the National Association of Triads, Inc., older adults tend to be trusting of people such as salesmen, contractors and officials, making them targets of fraud and home invasions.

SALT seeks to decrease and reduce the fear of crime to raise the livability for seniors, improve their crime prevention and education, improve law enforcement's understanding of their needs and concerns, improve senior victim assistance and involve them in crime prevention efforts.

"It's an open line to our senior community and a way they can access our office and personnel," Morgan said.

"They'll tell you what's happening around the community with the police and stuff," Sing-ler said. "It's interesting, and you get more information."

He's been active with SALT for several years after moving to Sweet Home, which he describes as a friendly community, in 2009.

His main concern about local crime is drug use, although he believes other cities are worse. However, he said he now knows the police officers better and the work they do, and hopes this year's meetings will include some field trips around the community and at police stations.

Now Singler volunteers with the police department, occasionally joining Morgan on radar tests. The two sit in an unmarked car for about 45 minutes on streets where the department receives complaints about speeders.

"We check how fast people are going through the streets," Singler said. "Some of them go pretty fast, some 10 or 15 miles over the speed limit."

According to Morgan, those speeders won't get ticketed that day; it's just an analysis of potential problem areas.

SALT contends with other problems too. Senior citizens are especially wary of an increase in phone scams, which have grown more complex and abundant in the digital age. Police Chief Jeff Lynn, Capt. Jason Ogden and Morgan delivered a presentation on the subject at the March 3 meeting.

"That was of particular interest to Leo because he gets all these interesting phone calls," he said. "He knows what to do with them, but he wanted to hear about it because he gets enough of them and wants to warn people."

After the presentation, some residents asked about recent efforts with the homeless community, and department personnel were able to explain the current situation.

SALT meets at 12:30 p.m. on the first Wednesday of the month at the Sweet Home Senior Center, 880 18th Ave. The next meeting is scheduled for April 7.

For more information about SALT, contact Sean Morgan at (541) 367-5181 or via email at smorgan@sweethomeor.gov.