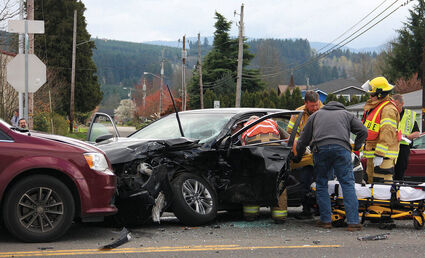 Medics assist the driver of a Toyota Camry that was one of three vehicles involved in a crash Tuesday, March 29, at the intersection of 44th Avenue and Main Street.

According to Sweet Home police, at 2:42 p.m., on March 29, Amber Williams, 30, was driving a black 2015 Toyota Camry north on 44th Avenue and turning onto Main Street when her car collided with a maroon 2017 Dodge Caravan intending to turn south onto 44th operated by Elizabeth Barber, 42.

The Camry also collided with a blue 1999 Dodge pickup, below, headed east on Main Street, operated by Kaidance Spinney, 18. Williams was cited for failure to obey a traffic control device. She was treated at an area hospital and released, police said.