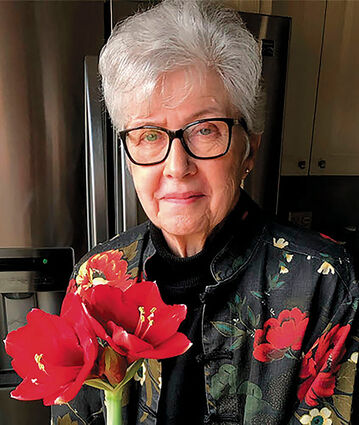 During hot Sweet Home summers, Diane's mom Ruth would pack a picnic lunch and the family would pick Royce up after work at Santiam Lumber and go down to the Santiam River near their house for a swim. The kids brought along soap and shampoo to clean up before dinner.

The siblings agree that later, when Green Peter Dam was completed, the water got colder.

As a teenager, Diane was active in Christian Endeavor at Sweet Home Church of Christ, where her parents were youth directors. Favorite activities included weekend retreats at her Aunt Vera and Uncle John Wilson's place, near Sisters.

There, the youth of the church enjoyed piling into Uncle John's old truck and exploring the hills and gullies around the ranch.

After graduating from Sweet Home High in 1965, Diane attended Oregon State University, but left before finishing to become a flight attendant with Trans World Airlines, based in San Francisco.

She met an Army officer just out of flight school in February 1970, and they married four months later. While her husband Jim was in Vietnam, she worked as a volunteer hostess at the USO Lounge in the San Francisco Airport.

On her husband's return, she became a full-fledged Army Wife, moving three times to Europe; three times to Fort Sill, Okla.; and twice to the Washington, D.C., area.

In 1974, she gave birth to a son, Christopher Douglas Kurtz, at the Army hospital in Frankfurt, Germany. In 1978, she finished college at Cameron University in Lawton, Okla., with a degree in home economics.

In Northern Virginia, she worked in the Admissions Office at George Mason University and on the staff of the non-profit National Community Education Association.

Her hobbies included sewing, embroidery, and competing with family and friends to see who could grow the tallest amaryllis at Christmas time.

Diane leaves her husband, retired Army Col. Jim Kurtz; her son Chris; his wife, Belinda Persinger Kurtz; and three grandchildren, Brandon, Megan, and Alex, all of Hardy, Va. She also leaves her sister, Marion Lang Spencer of Wasilla, Alaska (Sweet Home High Class of 1961); her brother Don Lang of Bend (Class of 1969); and her brother Bill Lang of Prineville (Class of 1971); plus in-laws, nieces and nephews, cousins, and friends.

Friends who knew Diane Lang growing up are invited to share their memories with her husband Jim Kurtz at kurtzjh@gmail.com