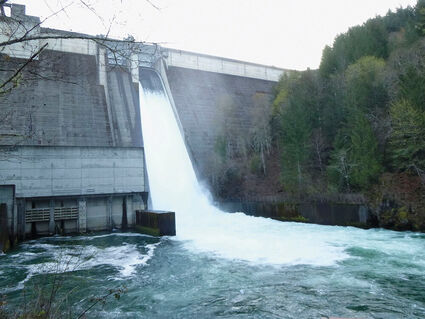 Courtesy of the U.S. Army Corps of Engineers

Water pours from the spillway at Green Peter Dam earlier this month. Water is being released from the spillway, instead of through turbines in the dam, in an attempt to improve survival rates for young salmon and steelhead, per a court ruling.

How high will the water be in the local lakes this summer?

That's a question that county parks officials are pondering as they watch water that normally would be stored in Green Peter Reservoir at this time of year flowing over the dam spillway.

It's planned, the U.S. Army Corps of Engineers said, and it's the result of a lawsuit filed a little over a year ago by environmentalists who argued that the Corps should be more transparent about its dam operations and their impacts on salmon and steelhead smolts heading out to sea.

"Basically, we're releasing water from the spillways, which is...