Building huts for the homeless 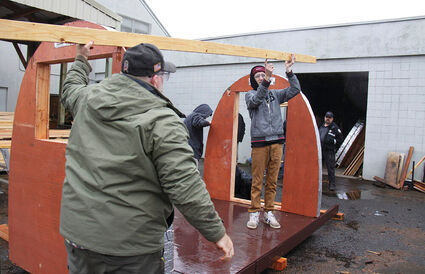 Kobe Pangle, right, and Sweet Home High School instructor Will Coltrin inspect the fit of a rafter on a newly erected Quonset-style hut to be placed at a homeless shelter site east of Bi-Mart. Coltrin's advanced construction class worked to assemble the structures.

As rain fell steadily outside on a gray April morning, Casey Valloni and Lewis Conn, students in Will Coltrin's advanced construction class at Sweet Home High School, assembled and nailed together some carefully cut 2x4s.

Around them, other students busily worked on similar pieces, busily assembling front facades for what eventually will be Quonset-style huts that will be erected at the new homeless shelter site east of Bi-Mart.

Coltrin said the students were building frames, then putting siding on them and insulating them before attaching them to walls and floors already completed by st...