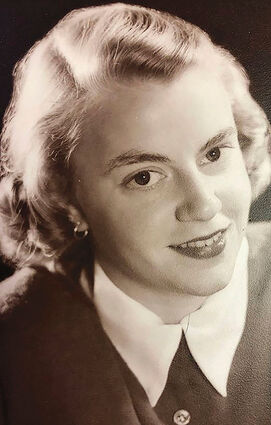 She was born Oct. 26, 1934, to Thomas Towerson and Jen Sena Maria (Nelson) Gunson of Plankinton, S.D., the youngest of eight children.

She attended high school in Junction City, where she was a cheerleader. There she met the love of her life, Dean LeClerc. They married August 7, 1952 in Harrisburg, shortly before Dean deployed to Korea.

Mrs. LeClerc moved to California while her husband was stationed in Korea, and returned to Junction City while pregnant with their first son. Upon Dean's return from the military, they lived in Junction City, then Lacomb, eventually purchasing a home outside of Sodaville, where they raised their five kids.

Mrs. LeClerc's retirement afforded her the time to engage in her passion, which was quilting. Family and friends received many of her quilts over the years.

She lived a full life filled with family and good friends. Mrs. LeClerc is remembered for a feisty spirit, quick wit, sense of humor, devotion to her family and friends, and her love of quilting. She was a wonderful grandmother to her many beloved grandchildren.

Mrs. LeClerc was preceded in death by her spouse, Royal Dean LeClerc; her parents; and her older siblings, Roger, John, Lester; Mary, Hazel, Ardene and Doris.

A memorial service was held April 23 at Sweet Home Funeral Chapel, with inurnment following the service at the Odd Fellows Cemetery in Lebanon.