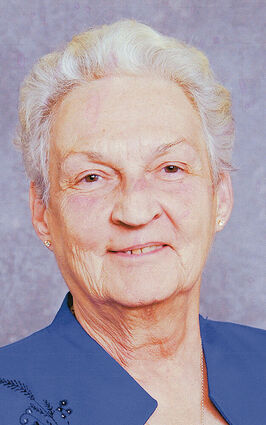 She was born on Aug. 5, 1945, at Sacred Heart Hospital in Eugene to Pearl-Marie (Templeton) Jovanovich and Thomas N. Jovanovich.

V-J Bells were ringing as they left the hospital to bring her home. Her mother remarried and the future Mrs. Allyn, with her two younger sisters, were adopted by William E. Wheeler and raised as his daughters.

Mrs. Allyn grew up in Sweet Home and graduated from Sweet Home High School in 1963. She married James D. Allyn at her parents' home on Jan. 22, 1966. A military life followed and the couple moved from Oregon to California where their children Dawn-Marie and William (Bill) were born in San Diego.

The Allyns lived in California, Oregon, Washington, Hawaii and Guam before James retired in 1985 to Sweet Home.

Mrs. Allyn was a life-long member of VFW Aux Post 3437 and served as district and state auxiliary president, as well as grand president of the Military Order of the Cootie Auxiliary. Additionally, she dedicated her life to volunteering with the VFW and other charitable causes.

A celebration of life service was held April 24 at the Sweet Home Elks Lodge. Sweet Home Funeral Chapel is handling the arrangements.