Difficult baseball season ends for Huskies with losses to Cascade 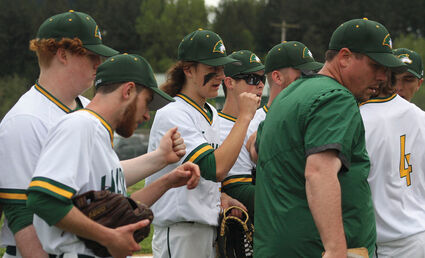 Coach John Best, right, gets set to talk to his players in a huddle during a game with Cascade May 11.

The Cougars beat the Huskies in Sweet Home 9-2 on Wednesday. The next day, the Huskies took to the road and played at Cascade, where the Cougars won 19-3.

Sweet Home finished the season 5-17 and 3-12 in the 4A-3 Oregon West Conference, a record that put the Huskies at last place in the tough OWC.

In the first game, Cascade (7-14, 5-10) scored three runs in the first inning, two in the second, and four in the sixth. Sweet Home's only two runs came in the bottom of the sixth, when an Alex Kisselburgh single scored Casey Valloni an...