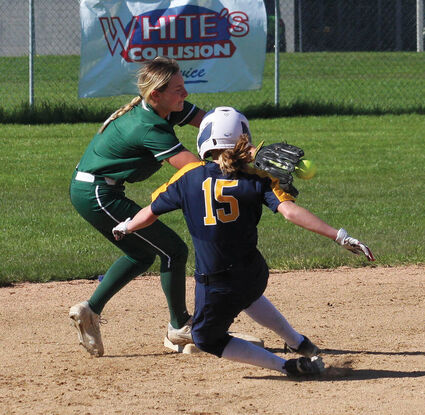 Brooke Burke get the ball at second ahead of Stayton runner Brooke Morley.

Sweet Home softball pulled off a big upset on Thursday, May 12 with a 4-3 win against a Cascade team that had an undefeated 17-0 league record in the Oregon West Conference, and was in the midst of a 14-game win streak.

To top it all off, the victory came on the road, spoiling the Cougars' senior night.

"All season we have been working on mental toughness, and learning how to work through situations as a team," Head Coach Karyn Hartsook said. "This game, the girls came together as a team of 13 to overcome those challenges. Everyone contributed. This win was a big one."

"The best part of the win for me as their coach was seeing their individual personal successes that brought the team together for a big win," Hartsook continued. "We call it big girl stuff. Their hard work paid off in their performance."

But in the top of the fourth, Sweet Home's Maddie Harris singled to score Chloe Fairchild. Later in the inning, Makayla Guthrie singled to score Harris and Brooke Burke. Sweet Home scored its fourth run when Fairchild hit a ground ball and reached on an error, allowing Kaylen Zajic, who was pinch running for Guthrie, to cross home plate.

Cascade answered right back with two runs of its own in the bottom of the fourth, putting the game score at 4-3 Sweet Home. But the Huskies would not let up any more runs, keeping their lead intact through seven innings.

Each team had seven hits and committed one error.

Guthrie went the distance for the Huskies in the circle, pitching a seven inning complete game. She allowed one earned run on five hits while striking out two batters and walking no one. Guthrie also led the team with two RBIs. Fairchild led all Huskies with two hits.

Sweet Home (18-6, 13-5) almost knocked off another higher-ranked team in a game against Stayton on Tuesday, May 10, but ended up losing at home to the Eagles in a nine-inning affair, 6-5.

Stayton (20-5, 14-4) jumped out to a 3-0 lead with one run in the first inning and two runs in the top of the third. Sweet Home got on the board in the bottom of that frame when Mykal Johnston scored on a fielder's choice.

Stayton then posted two more runs in the fourth inning, stretching its lead to 5-1. But Sweet Home started to claw its way back in it in the bottom of the fourth, when Kelsie Rush scored on a passed ball and Johnston scored again on a Fairchild single.

The 5-3 score remained until the bottom of the sixth, when a single from Burke scored Adaira Sleutel and Fairchild.

The game stayed knotted up at 5-5 until the top of the ninth, when Stayton used a sacrifice fly to take a 6-5 lead.

The Huskies had runners on first and third in the bottom of the ninth, but were unable to bring anyone home.

Sweet Home outhit Stayton 8-6 in the loss, but committed four errors on defense to Stayton's two.

Harris pitched all nine innings for the Huskies. She gave up three earned runs on six hits, while striking out six and allowing seven walks.

Fairchild led the team with three hits, including a double.

"The no-quit in the girls was exciting to see from them - throughout the lineup, offensively and defensively," Hartsook said of the game. "They have been working hard to improve their defensive play and offensive attack. We definitely competed the entire nine innings."

Sweet Home also took care of business with a 15-0 home win versus Newport (6-18, 4-13) on Wednesday, May 11. Sweet Home scored three runs in the first inning, six in the second, and another six in the third, ending the game after three innings with the 10-run rule.

The Huskies outhit Newport 8-1. The Cubs struggled on defense, committing 10 errors, while Sweet Home only committed one.

Harris pitched all three innings, giving up just one hit while striking out five and walking no batters.

Burke led the team with three hits and five RBIs. Guthrie collected two hits herself in the shortened game, along with two RBIs. 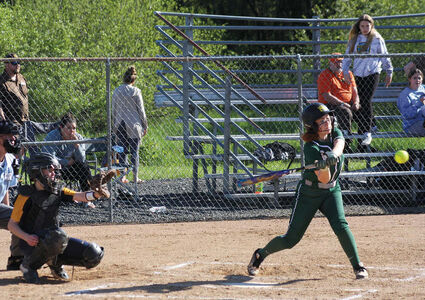 Riley Watkins gets her bat on the ball against Stayton.

Sweet Home, which currently sits at third in the OWC behind Cascade and Stayton, has one more regular season game next week, facing off at 5A Thurston (17-7, 12-4) in a non-league matchup on Thursday, May 19 at 5 p.m.