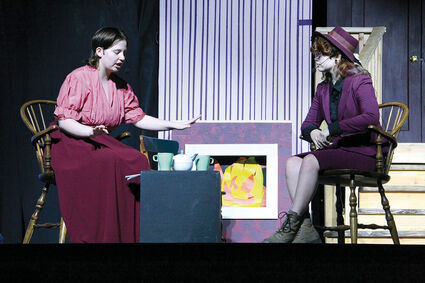 Autumn Ice, left, as Nora Helmer, speaks to Zola Carlyle, playing Mrs. Linde, during a rehearsal of Henrik Ibsen's "A Doll's House" at the Sweet Home High School Auditorium on Monday, May 23. Drama students will stage the play May 27-28.

Drama students at Sweet Home High School hit the stage this weekend for three performances of "A Doll's House."

The first performance is on Friday, May 27 at 7 p.m., with subsequent shows on Saturday, May 28 at 2 and 7 p.m., all at Sweet Home High School Auditorium.

"A Doll's House" was written by Norwegian playwright Henrik Ibsen and was first performed in 1879.

"Ibsen describes his plays as just being about people in general, but "A Doll's House" is really specifically about a woman who realizes she's not happy with her marriage," Director Leah White said. She describes the play as a "d...