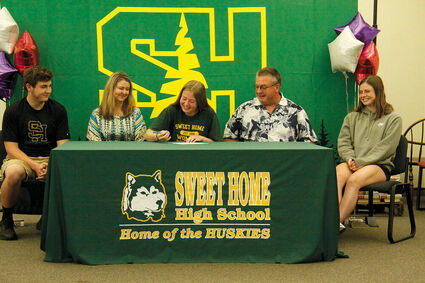 Kami Hart became the latest Husky to sign a letter of intent to compete at the college level, signing a commitment to wrestle at Linfield University during a ceremony at Sweet Home High School's library Friday, May 20.

She will be joining a brand-new wrestling program at Linfield, which decided to add the sport to its intercollegiate programs last fall.

"I chose Linfield because they're starting their new team this year," said Hart, who placed third in the state championships as a junior, her second year in the sport.

Hart was the top seed at 170 pounds going into this year's state tournament, but was upset in the quarterfinals and missed a medal.

Coach Steve Thorpe said Hart has gone far in a short time in the sport, in which wrestlers often start at a young age.

He recounted to a crowd of about three dozen people at the ceremony that Hart showed up as a freshman at her older sister, Jessy's practice session, but wasn't interested – initially.

"I didn't even know her name yet," Thorpe said. "I said, 'You should come wrestle for us.' She put her head down and shook her head no, like 'I'm having none of this.'

But she reconsidered, and showed up at the beginning of her sophomore season.

"Not many people that come in as a sophomore into a program make themselves state qualifiers, state placers, next-level athletes," Thorpe said. "Kami has been an incredible worker for us. But I think, and Coach (Tomas) Rosa can back me up, the leadership she provides for us in that program is hard to match. For me as a coach, that has been invaluable."

Linfield had a varsity wrestling program until the early 1980s, and produced on member of the National Wrestling Hall of Fame, Russ Thurman, in 1959.

"This is a big moment in Linfield's history, and in the history of Wildcat athletics," Linfield Athletic Director Garry Killgore said last fall in announcing the re-establishment of a men's program and the founding of a womne's program in the sport. "It represents our first new varsity programs in almost 25 years, which is not a step we took lightly. Women's wrestling is one of the fastest-growing sports in America, and we're excited to offer new opportunities for those athletes."

The group Restore College Wrestling Oregon met with Linfield's athletic department for three years, discussing plans, offering help and exploring opportunities, the college said. Larry Bielenberg, a four-time NCAA All-American and the 1975 heavyweight national champion for Oregon State, was the primary point of contact for RCWOR through that time. Bielenberg's daughter graduated from Linfield in 2006.

Chad Hanke has been hired as head coach and the college recently brought in four-time U.S. Open champion and international bronze medalist Alyssa Lampe as an assistant.

Hanke, who wrestled at Dayton and then moved on to Oregon State University, brings seven years of coaching experience to the Wildcats. As a wrestler he qualified twice for the NCAA Division I National Championships. He also competed as a senior-level athlete for four years at the National Regional Training Center, twice winning the FILA Junior national championship in 2008 and 2011. In 2012, he was invited to participate in the USA Wrestling Olympic Team Trials.

His collegiate coaching experience includes two years as an assistant coach at Cal State-Bakersfield (2018-20) and three years in a similar role at American University (2005-18). He also spent one season as a volunteer assistant coach at Oregon State (2014-15).

"We intend for Linfield to become an NCAA powerhouse on both the men's and women's sides," Hanke said. "Alyssa and I will work hard to make that happen in the years ahead."

Thorpe said Hart will wrestle for "a coach who is one of the top levels in the United States," noting that Lampe was competing for a sport on her fifth world team – which she clinched – as Hart was signing her letter of intent.

He said he coached Hanke on Oregon's national team some years ago.

"He's a good man and he's a small town boy, you know, from Dayton area there. He's going to do good things."

Hart said she had contact with the coaching staffs of Corban and Southern Oregon, both of which have recently instituted women's wrestling programs, but decided on Linfield.

"I really like their campus. It's a really, really nice campus and also, their weight room is really nice," she said.

She said she plans to study to be an athletic trainer.

"What I want to do is, like be on a sports team and travel around with them and be their athletic trainer," she said. "I thought that'd be pretty cool."

Thorpe said it was pretty obvious what the right choice was.

"Cami went and visited, you know, and looked at some other schools, but when when she came back, she said to me, 'Well, I kind of liked it, but at Linfield ... but at Linfield.'

"I said this is done. This is the right place. I don't know God's plan for her in this, but I know it's a plan. I'm really excited and proud of her."