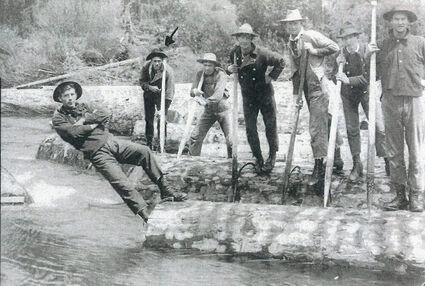 A logging crew drives logs down the Santiam River en route to Lebanon's Scroggins Lumber Mill in this undated photo, which was used as a cover illustration for the book "Sweet Home in Linn County, New Life, New Land," compiled by Martha Steinbacher and other East Linn Museum volunteers in 2002.

Thanks to late East Linn Museum volunteer Ted Fitzwater, we can float down the South Santiam River on a log drive.

Inspired by the cover of "Sweet Home in Linn County, New Life, New Land," a museum-produced book compiled by Martha Steinbacher and other volunteers in 2002, Ted investigated his family members' associations with an early-20th-century log drive down the river. The cover depicts seven men standing on logs, six with their peaveys. The foremost fellow leans at a 45-degree angle off the end of a log over the water. His hidden peavey, we conclude, holds him up.