Looking for a few good veterans 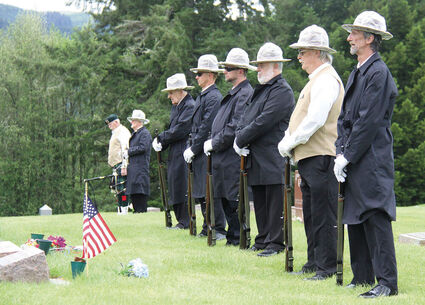 Since 1957, the Sweet Home Veterans of Foreign Wars Honor Guard has given military funeral honors to late United States veterans. But it could use a few more members, especially as its existing personnel gets older.

"We're just aging out," bugler Ken Collins said. "We're getting old, and it's difficult to do the job of an honor guard when you're 90."

For one thing, he said, M1 rifles - the semi-automatic weapons used in U.S. service during World War II and the Korean War – are extremely heavy, significantly more than the weight of their military contemporaries.

"The modern military man would not have a clue as to what an M1 is," he said. "If you have this heavy rifle, you're 90 years old, and you're standing at some kind of a form of attention for a half-hour or maybe 45 minutes at a funeral. That's almost overwhelming for you to do physically."

Guard color sergeant and rifleman Stan Gray said that some members "are getting up real high in age, and it's getting harder and harder on our bodies and knees and hips to do it. Sometimes when we are up at one of the cemeteries and it's at a pretty good slant, that's hard on hips."

The current guard consists of riflemen Dale Jenkins, Bill Mancuso, Marion Fritts, Daniel McRorie, and Gray, along with Collins as bugler, David Brock as bagpiper and Howard Ruby as chaplain.

According to Gray, seven people have been lost in the last decade to relocation or death. He's looking to fill those gaps with former military personnel (not necessarily those who have seen combat), irrespective of branch. The U.S. Army, Navy and Marines are currently represented. He preferred veterans because "They understand the commands and everything that goes on with honors."

"We need other people to have the commitment that we have," Collins said. "This is an important assignment to do for those that have done it."

The guard typically performs honors at cemeteries, churches, residences and the Sweet Home VFW Hall, either in the hall itself or in a park behind the building. Gray said the record was 42 in a year, and he thinks the guard's done nine ceremonies this year thus far. While its members live in Sweet Home, it sometimes works in surrounding towns such as Lebanon.

Activity picked up following the loosening of COVID-19 restrictions.

"We got pretty busy there for a while," Gray said, "because people would die and you couldn't really do anything, so they held off." Gray said. But he said it's since calmed.

A typical honor guard event features a 21-gun salute, where each of seven riflemen fire three volleys. However, with only five in its ranks, the Sweet Home chapter has been firing 15 shots. Then Collins plays "Taps," the traditional 24-note salute, on his bugle.

"We're fortunate to have a bugler, because a lot of them do not, and they have to play 'Taps' on a recording machine," Collins said.

The American flag is then either folded or presented to the family of the deceased, most often by military branch members.

"We can [fold the flag] if requested, but that just means two of the riflemen have to lay their rifles down and go up and do that," Gray said. "If we had more people, we wouldn't need to lay down rifles in order to do that."

Finally, Brock concludes the ceremony with "Amazing Grace" on the bagpipe.

"We come well-prepared," Collins said. "There probably aren't too many honor guards in the state of Oregon that have all of that combined."

"So I did," Collins recalled. "And I took music all the way through elementary, junior high and high school."

From 1956 to 1959, he served at Naval Air Station Kingsville in Texas, training pilots on approaches. Later, he decided to go back to college and become a teacher, working at the Sweet Home School District from the 1990s to 2001 as a band director and music instructor.

Collins' son, also named Ken, directs the United States Navy Band in Washington, D.C., and vouches for the importance of military funeral honors. The older Collins recalled that his son said, "The most important thing our band does is honors for those that are being buried in Arlington National Cemetery. No matter what I do, where we go, what we play, how many concerts we play [the band played in President Trump's inaugural parade], that is not as important as playing for that serviceman who has served his time."

Collins reflected on the public's perception of veterans over the years.

"When the military got back from Vietnam, they were not looked at favorably," he said. "We were really looked down upon. So all the veterans I knew kept it a secret that they had ever been in the military. These guys were going to Vietnam. They didn't want to, but they had to. They did one or two tours, came home and were totally disrespected. That was a hard time."

"Now, with the things that we've gone through in the Middle East," he said, "the military is once again brought up to where it should be, and these people are being honored." 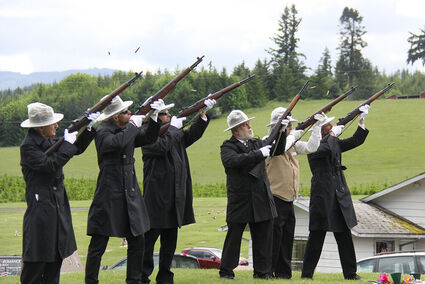 Gray, who became the guard's color sergeant in 2016 after replacing Jack Schmidt, said that the three rounds fired in the ritual represent honor, duty and country. He knows a thing or two about those values himself, having served for 28 years in the Oregon National Guard.

He began in 1980 while still in high school. He started with seven years of service, then returned from 1990 to 1992, stationed in Redmond in transportation. He didn't much like that stint because of all the sitting.

But he rejoined the Oregon National Guard in 1996, staying until 2015 as a part of the infantry, even into his fifties. During that period Gray served under hostile fire in Kuwait and went into Iraq three times.

Now, as color sergeant, he works with the rest of the crew to give veterans the recognition they deserve.

"Anybody that's defended the United States of America deserves a proper burial with military honors," Collins said. "I think it's very important."